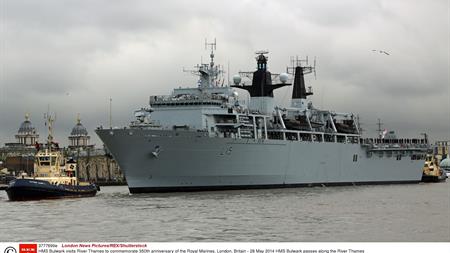 Neal Edmonds, 42, was carrying out maintenance work on a lift on HMS Bulwark when he was crushed inside the lift shaft.

The MoD had failed to ensure there was a safe system of work to control the risks associated with lift maintenance, the Health and Safety Executive (HSE) found.

By accepting the Crown censure the MoD has admitted breaching its duty under s 2(1) of the Health and Safety at Work Act. There is no financial penalty but the censure is an official record that the ministry failed broke the law.

The accident happened on 11 June 2014 while the ship was docked at Devonport naval base in Plymouth.

The lift was used to carry food and catering equipment between decks and was not to carry staff, according to safety rules. However, Edmonds entered through a side panel in order to carry out repairs.

His colleague had sent him upwards in the lift from the control room and part of his body was extending from the confines of the lift. At around 18 m Edmonds's body struck a switch arm that was attached to the inside of the lift shaft and he sustained crush injuries.

HSE inspector Jonathan Harris said in 2015: "The method employed by [Edmonds] to access the lift was very far from complying with the Royal Navy standard of work for fault finding and repair of the lift. He was not authorised to carry out the work; he was not supervised; and there were no formal instructions to him to carry out the task."

A toxicology report found that Edmonds was three times over the drink-driving limit, which may have impaired his motor functions.

After the hearing, the HSE's deputy director of field operations Jane Lassey said: "Like any employer, the MoD has a responsibility to reduce dangers to its personnel, as far as they properly can, and in this case they failed Neal Edmonds."

A crown censure is the maximum sanction a government body such as the MoD can receive.