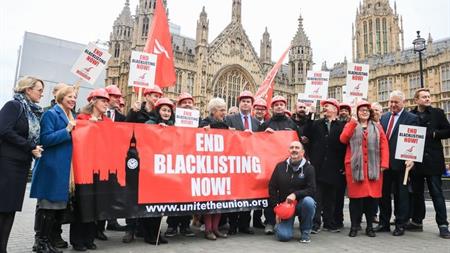 The Met's deputy assistant commissioner Richard Martin made the admission in a letter responding to a complaint made by the Blacklist Support Group (BSG) to the Independent Police Complaints Commission.

It said: "Allegation: Police, including Special Branches, supplied information that appears on the blacklist, funded by the country's major construction firms.

"The report concludes that, on the balance of probabilities, the allegation that the police or Special Branches supplies information is 'proven'.

"Material revealed a potentially improper flow of information from Special Branch to external organisations, which ultimately appeared on the blacklist."

The letter also said there had been an "improper flow of information from Special Branch to external organisations, which ultimately appeared on the blacklist".

It follows a six-year investigation by Scotland Yard.

Officers were first accused of colluding with the now defunct Consulting Association in 2012 by the Information Commission's Office investigator David Clancy, who had uncovered the business three years earlier.

BSG secretary Dave Smith said: "We have waited six years for this. When we first talked about police collusion in blacklisting, people looked at us as if we were conspiracy theorists."

The Consulting Association's secret database of more than 3,200 building workers had been used by some of the UK's largest construction firms to identify potential "troublemakers" -- including those who reported safety failings -- and deny them work.

Last September, a group of MPs called for Sir Robert McAlpine to be stripped of its contract to restore the Elizabeth Tower and Big Ben in London's Houses of Parliament due to its blacklisting history.

Trade union Unite is now considering whether to launch further legal action on behalf of its members who were blacklisted.

It is already seeking compensation on behalf of more than 70 blacklisted construction workers over cases for breach of privacy and for Data Protection Act offences and will now investigate whether it is appropriate to pursue the police in legal action, it said.

Howard Beckett, Unite's assistant general secretary said: "The latest revelations which have confirmed that the police were both actively spying on construction workers and feeding that information to blacklisters potentially has major implications for blacklisting legal cases."

Assistant general secretary Gail Cartmail added: "This is a major breakthrough the police have finally been forced to admit what we already knew -- that they were knowingly and actively involved in the blacklisting of construction workers. It is disgraceful that they had chosen to sit on this admission of guilty for so long."