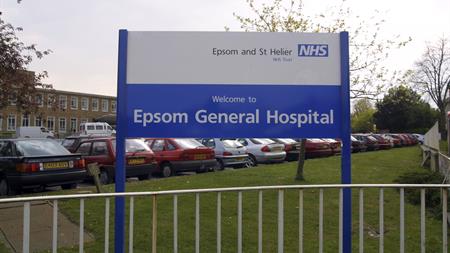 Adam Withers, 20, was admitted to Epsom General Hospital's Elgar Ward as a voluntary patient on 14 April 2014, with an acute psychotic illness.

An inquest held at Woking Coroner's Court in January 2016 heard that in the early afternoon of 9 May 2014, Withers had held a conversation with a member of staff in the ward's courtyard, saying that he could see a ladder attached to a 40 metre chimney and wanted to climb it.

The ladder had been installed the full length of the chimney on 2 May for a maintenance inspection and was due to be taken down the same day. However, the inspection identified the need for further remedial work and the ladder was kept in place while the work was carried out.

Despite a risk assessment stating that patients should be supervised while in the Elgar Ward courtyard, the inquest also heard that there were no members of staff present shortly after 6pm when Withers was able to climb, via the conservatory, on to the ward's flat roof. From there, he made his way to the chimney base and managed to bypass measures to stop its unauthorised use. He scaled the chimney but fell to the ground, suffering fatal injuries.

At the end of the inquest on 22 January 2016, the jury concluded that a number of failures by the Surrey and Borders Partnership NHS Foundation Trust had "caused or more than minimally contributed to" the patient's death.

The NHS Foundation Trust entered a guilty plea to one count of breaching general duty of care by an employer to someone other than an employee at Guildford Crown Court on 27 January. A provisional date for the case has been set for 22 June.