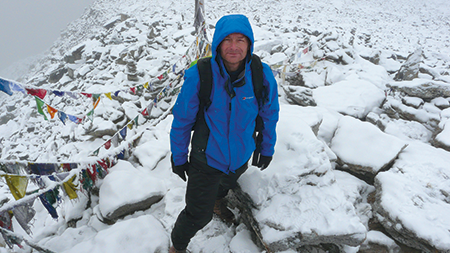 At university I joined the hiking club and went on several trips to the Lake District. Later, when I had my children, I wanted to show them the places I'd visited, so I carried on making trips to the Lakes and the Peak District, as well as doing trips abroad.

Fell running is an endurance challenge. I live in London, where it's relatively flat. I've run the London Marathon and can handle distance, but I don't really enjoy running on the streets. When I'm running in the Peak District, it's a whole different ball game: it's seriously high. I love looking at a huge hill and thinking, "I can do that". It's about testing myself. When I can feel my pulse hammering in my ears, I feel alive.

I like being self-sufficient -- packing my water, snack and torch. Fell running is weather-dependent. I've had to turn back before. One time I got up at 4.30am to climb Helvellyn in the Lake District. I started out, but soon the rain was lashing down and I knew it would be a miserable day -- slippery and dangerous. Earlier this year, I was on the Kinder Scout plateau in the Peak District, and there was snow that was shin-deep in places. You can't run in snow: you'd barely do 0.5km an hour, and it's hazardous.

Planning is vital. As well as the weather, I check sunrise and sunset times. In the summer, if sunset is 9.45pm I know I'll have maybe 60 minutes of twilight after that. But there's very little twilight in winter: if sunset is 5pm, it'll be pitch black 15 minutes later. I always carry a compass, as coming back down a hill can be very disorientating. Temperature changes accompany altitude -- a temperature of 3°C in the lowlands could become minus 6°C on a summit -- so I go well equipped: waterproof top and trousers; food; and Kendal Mint Cake -- the classic energy snack for climbers that was taken by the British Mount Everest Expedition in 1953.

People often say to me, 'How come you take risks, given what you do for a job?' But it's measured risk-taking

People often say to me: "How come you take risks, given what you do for a job?" But it's measured risk-taking. I really feel alive when I'm in the mountains, because it's just me against the elements. So much of life is organised, and it's good to step outside that -- for my mental and physical health. Sometimes I run, sometimes I jog or walk. I can be three-and-a-half hours away from the car with no mobile phone signal, looking at a waterfall, and it's a great feeling.

Health and safety laws are demanding: you 'must' ensure this; you 'must' report that. In an office, if you were to use a kickstool that you know is wobbly, technically you'd be breaking the law, because you're putting your health and safety at risk. But when I'm running up a slope and choosing rock holds, I'm taking calculated risks. I always tell someone where I'm going and when I expect to be back.

One of my best mountain experiences was trekking to Everest base camp in Nepal. It was snowing at the top of Kala Patthar at 5,549 m (18,208 feet) so the view of the glacier was obscured. However, when the weather cleared there was a brilliant view of the summit. I'm lucky that I don't experience altitude sickness and really like heights.

I had a less positive experience one time while exploring Kinder. I was racing against the sun setting, and decided to push on a bit further before turning back. But I got disorientated and came back down the wrong valley. Then the clouds came in and darkness came more quickly than I'd expected, so I had to switch on my torch. There were steep rocky drops and I was worried at the time -- it was my own human error.

You need a clear plan before you set off. When something goes wrong, it's usually because you didn't have a plan, or didn't stick to it. It's the same at work: fail to plan and plan to fail. The cornerstone of fell running, just as with health and safety, is risk assessment. You need to ask yourself: "What if something goes wrong?" It's why I always carry spare batteries for my torch, water, tea and survival bag, which I would climb into to keep warm if the worst happened and I was unable to walk and had to wait for rescue.

I'd recommend walking or running in the Lake District or Peak District, but if you haven't done it before, make sure you go with someone else. Choose well-worn paths, and always take more food and drink than you think you'll need.

Sometimes I have the best experiences in less inviting weather, because I get solitude. I've had days when I haven't seen anyone for six hours. How often in life are you alone for that long? Life in the city is a stressor, and fell running is an antidote. Sometimes all I can hear is a bird, and at the summit it can be absolutely silent. I've seen snakes, owls and deer while out running, but no wild big cats -- so far.
Topics:
Off duty