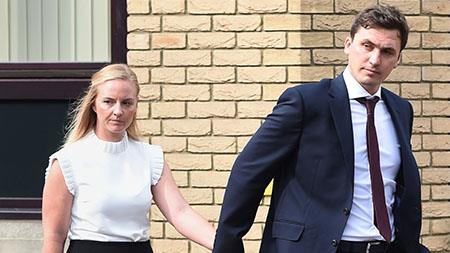 William and Shelby Thurston, who were overseeing several rides at Thurston's Funfair at Harlow Town Park in Essex on 26 March 2016 when the incident happened, denied responsibility for the child's death. But a jury at Chelmsford Crown Court convicted the pair on 9 May following a three-week trial.

The court was told that the couple had failed to anchor the inflatable dome to the ground securely and did not monitor weather conditions to ensure that it was safe for the bouncy castle to be in use. Summer was trapped inside the castle when a gust of wind blew the dome away from its moorings. It travelled 300 m down a hill and struck a tree before coming to a rest. Summer sustained multiple injuries to her head, neck and chest.

Witnesses told the court that on 26 March 2016 it had been raining and was windy. A yellow weather warning for high winds was in place and the weather forecast for the weekend was stormy, with Storm Katie expected to arrive on 28 March.

The Essex Police investigation found the couple were running several rides at the funfair, including three inflatables -- a large slide, a smaller slide and the Circus Super Dome, which was involved in the incident.

The couple opened the rides at about 2.15pm but at 3.30pm William Thurston decided to deflate the large slide due to forecast weather conditions. As he did so, Summer was on the Circus Super Dome. Just after 4pm, it became untethered, lifted in the air and blew away.

The couple told the court they had regularly checked the Met Office weather updates on the day and had seen the wind was due to pick up in a few hours, so agreed to deflate the large slide first due to the rain. They claimed it was not windy and that a sudden gust blew the dome away.

A meteorologist confirmed weather warnings were in place for the area on 26 March and that wind speeds and gusts had increased throughout the day. According to the HSE, the maximum wind speed recorded on the day was 66 kph.

As part of the police investigation, the HSE reinflated the Circus Super Dome and carried out an examination of its condition. Investigators said that, although it was generally of sound construction and thought to be in a satisfactory used condition before the incident, its design did not conform to BS EN 14960, the relevant British Standard for safety in such equipment. The inflatable had insufficient anchorage points and should not have been used in wind speeds above 38 kph. According to the HSE, it is recommended that operators measure wind speed locally with an anemometer when opening rides.

The HSE also identified damage to a power cable, which should have been identified during daily checks. The cable was not fully encased where it fitted into the blower, exposing bare wires. When the couple were interviewed by the police, they said they were familiar with the instructions for using the bouncy castle and that it was checked before and during use.

Detective chief inspector Daniel Stoten, of the Kent and Essex Serious Crime Directorate, said: "The inflatable should never have been in use in those weather conditions and the operators should never have allowed Summer to play on it."

Sentencing has been adjourned until a date yet to be set.

London, England
Up to £50000 per annum + plus excellent benefits package
Reference
5447892
END_OF_DOCUMENT_TOKEN_TO_BE_REPLACED