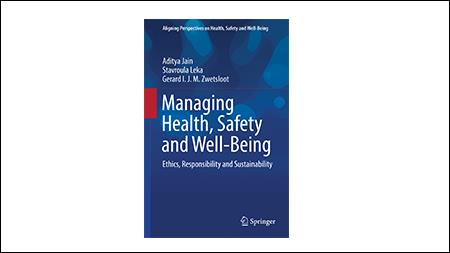 Springer claims it is the "first book on health, safety and wellbeing that aligns different research perspectives". Its seven chapters are set out logically: starting with "where we are now", a critique of current approaches is followed by a chapter that argues the business case for SHW. The profound synergies between it and ethical business practice are outlined before the authors set out how it should be seen, not just as a legal entitlement, but as a fundamental human right. Ways to "mainstream" SHW by integrating it with other business goals so that it becomes an inseparable part of the corporate culture complete the main text.

The book is academic in its approach and tightly written. All chapters start with an abstract and end with a full list of references. The style is not always kind to the general reader: p 22, for example, tells the reader: "-¦ salutogenesis also presumes that disease and infirmity are not only possible but likely because humans are flawed and subject to entropy...". But at least the text is broken up with tables and diagrams. One of the book's great strengths is the authors' ability to seamlessly and fluently pull together global research findings.

But there is a downside to this approach. By the time researchers have studied and reported on social trends, the world has moved on; much of the quoted research is more than ten years old. Also, the global scope makes it difficult for the authors to drill down to the organisational level. There are a few individual case studies, but they are from global players such as Shell, DuPont and Procter & Gamble. This does matter because few of us operate on such a lofty plane. Although we are (hopefully) passionate about how we might drive improvement in our workplace, we are perhaps less concerned with how SHW should be regulated nationally or supranationally.

The authors excel at setting the context and describing the problem, but they lack the same confidence when it comes to providing practical solutions. The foreword promises "a satisfactory answer to the challenges that OSH professionals as well as policymakers are facing". That is a fine and bold aspiration, but the book falls short of delivering it in full.

* All prices correct at the time of review