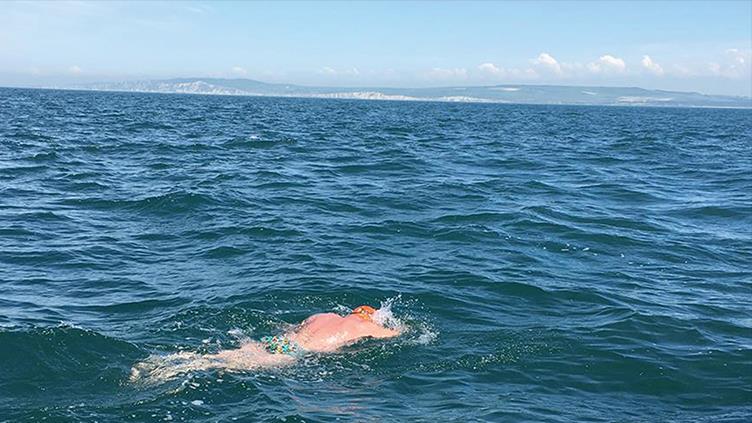 After briefly getting back into the pool at my next posting, I stopped for a further five or so years. I then returned to competitive swimming when I met somebody who did open-water swimming. I started with a pedestrian once-round-a-lake and really liked it.

When you start open-water swimming, you discover it's a real community. The more you do, you realise there are communities within communities. I found the "skins" community, who swim without a wetsuit, and started doing that. When the open-water season ends, most people go back to indoor pool swimming, but I discovered winter swimming, and started skins swimming all year round. It might not appeal to everyone, but it appeals to me. You migrate into it. You might come out cold and shivering but there's the endorphin buzz.

The English Channel idea came out of nowhere. I was sitting on a grassy bank by a lake in summer with fellow swimmers and someone made the flippant remark, "We could do the Channel". Two years later, after an awful lot of training, we did.

The English Channel is one of the world's busiest shipping lanes, so you can't just swim out 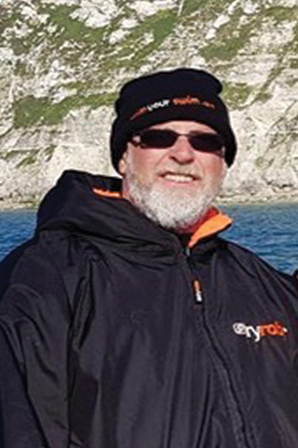 Pool session training would typically involve 50-100 lengths as a warm-up, then 200-300 lengths at training pace, followed by 50 lengths to wind down. Outdoors in the lake, I would do five or six miles each session, and up to eight miles during weekend sessions. Indoor sessions lasted about three hours and I completed them every day. I swam outdoors on Wednesdays, Thursdays, Saturdays and Sundays. Sometimes we did a "double dip": starting with an indoor swim, then jumping in the car to go straight for an outdoor swim, or vice versa.

The English Channel is one of the world's busiest shipping lanes, so you can't just swim out. There's a list of pilots licensed to do swims, and you have to complete several qualifying sessions, including one in the sea, to prove you can cope with time in the water, the distance and the temperature. The regulations specify you're not allowed to wear a wetsuit; it's a rubber hat, goggles and Speedos. You pay a fee of £3,000, which is for the boat: you have official observers, a captain and a captain's mate. You must also complete a medical, which includes an electrocardiogram.

Our swim started at 2.30am on 3 June 2018. I was in a group of six, some of whom I knew because they put swimmers with similar speeds together. Right up until starting I had serious doubts. The distance is officially 22.6 miles but, because you're moved left and right in the water, you swim closer to 32 miles in total. The water was 12°C, which is hypothermia territory. There was little moonlight, so it was very dark when we began. Psychologically, one of the worst parts is that you're instructed to jump into the water and swim for five minutes to the "beach" -- a collection of pebbles at the base of the cliffs of Dover -- then climb out before jumping back in to start the swim officially.

We swam the Channel in 15 hours and six minutes, and once I'd got going I was able to enjoy it. You get a call from the boat once you've done an hour, and that's the first milestone. The next amazing milestone was when I got ahead of the boat and I could see the sunrise on one side and the moon on the other. You keep pace with the other swimmers and the boat keeps pace with you, and you have multiple people encouraging you to keep going. When you're swimming you can't think about much else, which is why it's good for stress. You're self-checking constantly. Is my stroke OK? Are my legs OK? Do my hands work properly? How is my body position? Am I taking on enough fluid to avoid cramp?

Where you climb out depends on the tide. We landed at Wissant in Pas-de-Calais. It's a strange feeling when you finish. You feel empty, and you're too tired to be excited straightaway. The return journey is 2.5 hours by boat. When you arrive back in Dover, you go to a pub where you sign a book that records the names of all those who have successfully swum the Channel. Then I went to my hotel room and crashed out. Some people experience sea sickness during the swim; some afterwards. I experienced the latter and spent the next six hours clinging to the bed as it rocked. It was the next morning that the realisation hit me. I looked out of my hotel room window across the Channel and thought: "I just swam that!"

Five years ago, I had high blood pressure and I was on anti-depressants. Now it is lower and I'm no longer on medication for depression. Open-water swimming is a great leveller. I have a daughter who has significant physical disabilities and we take her open-water swimming. It's true that anyone can do it. The community offers incredible support.