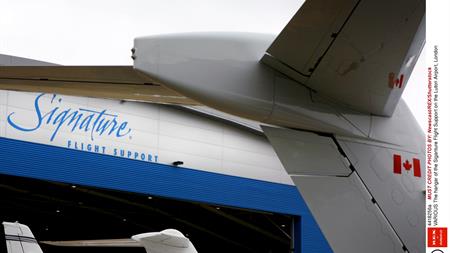 Suzi Dorbon, 47, an aircraft mover at Signature Flight Support, became trapped between two sections of a door as she prepared to move aircraft inside Hangar 219 on 28 April 2015.

Her severe crush injuries caused brain damage and she remains in a vegetative state at the Marbrook Centre in St Neots, Cambridgeshire, St Albans Crown Court was told.

Following an investigation the Health and Safety Executive (HSE) concluded that the company had failed to adequately plan the aircraft movement and had not provided its staff with proper training or written instructions.

According to an ITV report, Signature gave staff short training sessions on how to operate the hangar's doors after they were fitted in April 2014. However, the risk assessment had not identified the possibility of being crushed by the doors.

Judge Andrew Bright said: "In particular, staff were not told of a specific distance to stand back from the doors when operating them, nor were they provided with any follow-up or refresher training."

He added that proper supervision and monitoring would have made it "apparent that the ways in which some employees were moving the doors were unsafe and that the staff needed to be provided with further training and instruction to prevent unsafe methods of work from becoming commonplace".

After the accident the company painted yellow markings on the floor to keep employees away from the hangar doors, increased warning signs in the area, introduced a new guidebook on how to open and close the hangar doors safely, provided staff with refresher training, and regularly reviewed its closed circuit television footage to monitor the doors' use.

Signature Flight Support pleaded guilty to breaching s 2(1) of the Health and Safety at Work Act. It was handed a £250,000 penalty and ordered to pay costs of almost £20,000 within 28 days.

After the hearing HSE inspector Andrew McGill said: "The injured person's family has been left devastated after this incident. Her husband gave up work to care for her daily and has been diagnosed with post-traumatic stress disorder.

"If a safe system of work had been in place prior to this incident, it could have prevented the life-changing injuries sustained by the employee."