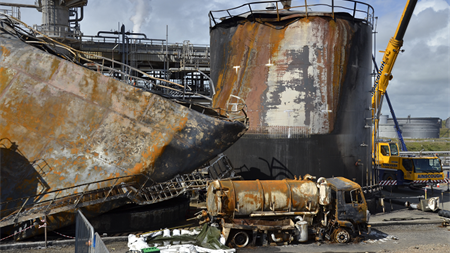 Swansea Crown Court was told how the fireball explosion ripped through the roof of a storage tank that was being emptied in the amine recovery unit (ARU) by five workers.
The five-tonne tank roof was thrown 55 m into a butane storage sphere. It narrowly missed a pipe track used to transport several flammable materials.
Dennis Riley, Robert Broome, Andrew Jenkins and Julie Schmitz died in the blast on 2 June 2011. The fifth worker, Andrew Phillips, was very seriously injured during what should have been a routine emptying operation in preparation for further cleaning and maintenance, the Health and Safety Executive (HSE) said.
Its investigation found that the explosion was "most likely" triggered by an ignition source inside the tank. There were "longstanding failures in the refinery's safety management systems" that meant flammable atmospheres in the ARU were not "understood or controlled", it said.
Fuel company Valero Energy UK and tank cleaning specialist B&A Contracts, a long-term contractor at the refinery that was carrying out the work at the time, both pleaded guilty to breaching ss 2(1) and 3(1) of the Health and Safety at Work Act at Haverfordwest Magistrates' Court last October.
Yesterday (6 June) they were fined £5m and £140,000 respectively. Valero was also ordered to pay £1m costs, while B&A, which employed Broome, Jenkins and Riley, must pay costs of £40,000.
The refinery's former owner Chevron will pay the £5m fine and costs as part of an arrangement it reached with Valero, which acquired the refinery two months after the disaster.
The HSE said the blast was "entirely preventable".
It happened about ten minutes into a procedure to remove liquid and sludge from the bottom of the tank through a hose into a vacuum tanker, Wales Online reported.
The court was told that an electrostatic spark from the hose was "overwhelmingly likely" to have caused the explosion, though it was not possible to say for certain.
A reading of the tank's flammable gas levels, taken just days before the incident, showed it had a lower explosive limit of 67%. A safe limit would be under 10%.
Judge Mr Justice Lewis said these results should have "stopped everyone in their tracks", but a lack of staff communication meant they were "not properly communicated" or "not understood" and created an "accident waiting to happen", according to BBC News.
Valero is classed as a "very large" organisation under the sentencing guidelines for safety and health offences, while B&A is a "micro" company.
HSE inspector Andrew Knowles said: "This incident, which had devastating consequences for all those involved, was entirely preventable. Many opportunities to take action to control risk were missed that would have prevented the incident from occurring.
"It is important to realise that the incident could have had even more serious consequences had the butane sphere or pipe track been damaged by the flying tank roof."
Detective superintendent Anthony Griffiths added: "Officers from Dyfed-Powys Police worked closely with the HSE to support them in the very complex investigation to establish the cause of this tragic incident. We hope that the lessons learned ensure that a tragedy of this nature doesn't happen again. Our thought remain with all the families involved."
Topics:
Chemicals
Fire
Safe systems of work
Sector: Energy
News
Share