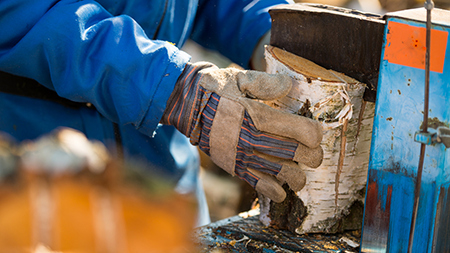 Exeter Magistrates' Court heard that on 29 December 2017, self-employed tree surgeon Darren Gillespie was working with another employee on the log splitting machine at the Josh Noon Tree Services site in Lapford, Crediton.

The 33-year-old, who had been given gloves, was loading logs in the splitter, and then removing the split logs and throwing them into the log store while his colleague operated the machine. His hand became trapped and when he pulled away, he found his right-hand index finger had been severed along with the tip of the middle finger.

The HSE found there was no suitable risk assessment made of the machine before Gillespie, who had never used it before, started work. The court heard he had been verbally told about how it worked and the various parts, but a proper system and guidance was not in place.

Investigators told the court that allowing two people to operate the log splitter made the system unsafe. The correct method was for one person to load the logs then move away and operate the controls.

The court heard he had been verbally told about how it worked and the various parts, but a proper system and guidance was not in place

Following surgery Gillespie still suffers from pain and the incident has significantly impacted his ability to continue to work as a tree surgeon.

Joshua Mark Noon pleaded guilty to breaching reg 3(2) of the Health and Safety at Work Act, in that he failed to follow proper safety systems in the operation of the machine.

Speaking after the hearing, HSE inspector Paul Mannell said: "This incident could so easily have been avoided by simply carrying out correct control measures for machinery guarding and safe working practices.

"Employers should make sure they properly assess and apply effective control measures to minimise the risk from dangerous parts of machinery."