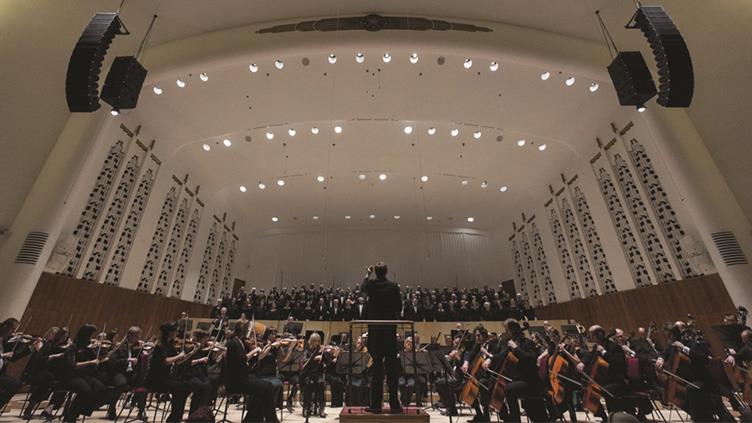 Joining Liverpool Philharmonic as head of safety and production in May 2015, Gail Wroth Tech IOSH could have been forgiven for assuming most of her time on OSH issues would be spent controlling noise exposure, manual handling and work at height. Instead, working with the organisation's capital development director, she was plunged into managing the production interface between building contractors and performances as the Grade II* listed Art Deco Liverpool Philharmonic Hall was in the midst of a £14.5m refurbishment.

Not that Wroth was fazed by the construction work; she had managed safety and production at some of the city's biggest entertainment venues, including the Liverpool Echo Arena and Conference Centre and the Empire Theatre where she had been involved in new-build projects from the start.

Work began on the two-stage Philharmonic Hall revamp in May 2014. The first phase included works to the 1,674-seat auditorium, all public and front-of-house spaces, backstage dressing rooms and warm-up areas. The second involved the construction of new facilities behind the hall on the site of a tired 30-year-old block, including offices, instrument storage space and a smaller-scale venue, the Music Room, with a 160 to 250 capacity. The works were completed in October 2015.

Commercial neccessity - the hall hosts 240 performances a year from visiting artists, from Nigel Kennedy to Adam Ant -- the Royal Liverpool Philharmonic Orchestra's intense rehearsal, recording and concerts schedule and completion delays meant the venue was not closed during the latter part of the works. Managing the later fit-out stages presented challenges for Wroth and her team.

"Getting the contractors together with the orchestra and other events personnel was just two different worlds coming together," she recalls, "and they often collided."

Arranging for the traders to work around the orchestra's rehearsals and performances demanded strict coordination, Wroth says: "Our musicians would be playing on-stage and then a contractor would be drilling away somewhere -¦ we didn't have any 'dark days' when the venue was quiet to enable the builders to finish works. So it was a little bit of build, a little bit of orchestra."

Touring companies are our customers and we do want them to come back, so we try not to include too much red tape. We try and make safety fun, if we can 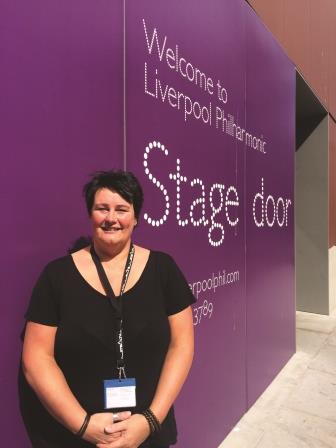 In August 2015, and still three months from completion, she introduced a permit to work (PTW) system. By now the building was fully operational with employees moving around the premises and expensive instruments including violins and cellos in the new music store rooms. "And the builders were going into the rooms to look at the air conditioning, and we would say 'Don't move! We'll just move these instruments out of the way'."

Contractors who had had free rein during the build found the PTW requirement a hindrance at first. "Having to get a permit signed for every single job was frustrating for them, but after a month it had sunk in and they were engaging with us and being far more receptive," says Wroth. "And they would say 'Will you help me fill in the permit?"

Staff communication was also essential during this period, she says. Employees received email updates on where contractors were working, backed up by daily briefings as they came in through the stage door.

"Briefings would include the configurations that were taking place during that day," she explains. "For example, when we first properly moved back in the lifts weren't yet operational, so employees had to be made aware of the implications."

As her job title suggests, Wroth has a dual role: half her time is spent on production management, including coordinating lighting, staging and audiovisual elements, while the other half is dedicated to safety and health. Her team consists of a technical manager and five full-time production technicians who also have safety in their remits.

Wroth began her career at the Belgrade Theatre in Coventry as an electrician in the early 80s, but safety has always been in the family. Her father was an explosives engineer in mining.

"I grew up with explosives on the kitchen table, so safety has always been something that I really, really respect," she says. "When I first started working in the theatre industry, there wasn't much safety around, so I thought 'I'm really keen to change this'."

I love the production side of things, but the legal side and the safety side really satisfies the other half of my personality 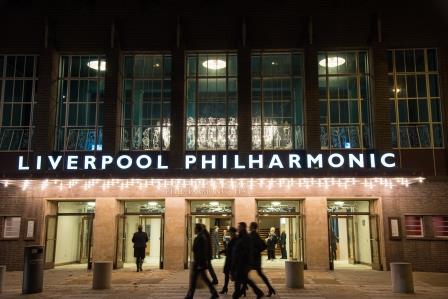 She previously worked with concert organiser Live Nation as a health and safety coordinator. The organisation had a strong safety culture, she says, rewarding employees who reported incidents with free event tickets.

It was clear to her that Liverpool Philharmonic's executive team placed similar weight on employee and public protection right from her initial interview. "Half of the questions were about safety," she says. "It's very rare that you get that. It was very refreshing."

As another example of what she describes as "a really healthy attitude to health and safety", Wroth offers the fact that the Philharmonic uses the services of a physiotherapist who is on call to help orchestra members, and production technicians who do a lot of lifting recover quickly from musculoskeletal problems. "I don't think I've been in any other venues that have done that," she says.

The 2005 Control of Noise at Work Regulations have applied to the entertainment sector since 2008.

Controlling noise exposure for Liverpool Philharmonic employees, including the 73-member world-class symphony orchestra, is a key safety responsibility for Wroth. It takes her to the core of the orchestra's work: "We will look at the artistic content of a piece. If they are playing something really heavy, they don't rehearse it for too long, as they will be working outside the noise levels that we want them to work at."

News of a Royal Opera House orchestra member suing his employer for hearing damage is not lost on Wroth, who says close exposure to the orchestra's brass section, for example, can easily result in noise levels of 100 db. "All members of the orchestra are fully aware of how noise can affect their hearing and ultimately their careers," she says. "They know that we have a duty of care to them and that they need to be looked after."

Before the venue's refurbishment, members of the orchestra were seated very close to one another. "The original stage was very, very small," she says. 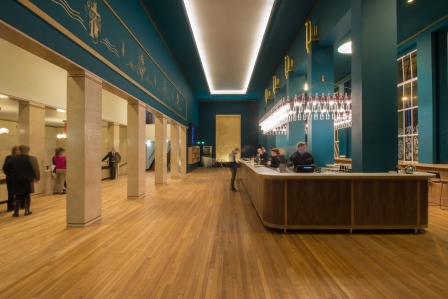 Detailed stage risk assessments take into account the position of each musician and their instrument plus the combined effect of louder sections. "The stage layout and plan is extremely important," Wroth says. "It outlines where everyone sits, and also at what height. If someone is sitting in the wind section we can adjust their height so they're playing above everyone else."

Dosemeters are attached to players of the orchestra and the orchestra manager will take separate readings during sound checks, rehearsals and performances.

The stage plans are not just important for noise management, but also for the logistics of performers getting on and off the stage. "We may be asking musicians to walk between lots of chairs, and up and down risers," she says. "The lead violinists have to walk from the stage up a step onto the stage, down another step to get to their place at the front of the stage. If they fell you'd have their injury plus damage to an instrument worth thousands of pounds. So we have to map those safe routes."

The plans are painstakingly drawn up, signed off by the orchestra manager and the technical manager and then given to the musicians. But all that work may need to be repeated if creative decisions dictate. "Guest conductors may come in and want to change the whole layout, so we have to change the stage plan, and therefore change the risk assessment. We do try to discuss with conductors in advance, but if they want to move stuff around they will. They're in charge -- they've got the baton." 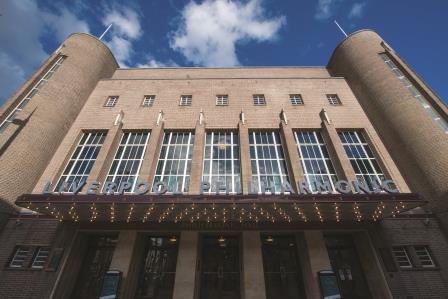 Wroth tries to ensure the same level of protection the orchestra enjoys at home follows the musicians on tour. This year they have already visited Sheffield, Cheltenham and Cardiff, and are due to entertain audiences in Manchester, London and Paris. A team of platform managers and other orchestra management staff accompanies the orchestra to its host venues. "We visit the venue beforehand, check out the space, carry out noise assessments and generally make sure that the venue is safe," she notes.

Back at Philharmonic Hall, the control of incomers which was all-important during the hall's refurbishment continues in its operation. The touring shows it hosts bring their own lighting, staging, and audio and visual equipment, all of which Wroth ensures is safe before it arrives, including certification for lifting hoists and Portable Appliance Testing certification.

This due diligence extends to the visiting personnel. "We always insist that riggers who work at height to assemble the rigging required to lift the lighting and sound are NRC [National Rigging Certificate] qualified," she says. "We also keep a competency register of the riggers who come in, so we can track them, and if they come back to do some work for us we can look them up and see that they're certified."

Working with touring companies and promoters is an important part of Liverpool Philharmonic's business plan so there is an emphasis on keeping the working relationship simple.

"At the end of the day they are our customers and we do want them to come back, so we try not to include too much red tape. We try and make safety fun if we can," says Wroth.

"I do love the job," she continues. "I love the production side of things, but the legal side and the safety side really satisfy the other half of my personality."

Gail Wroth was one of the winners of the IOSH Magazine launch competition. Other winners will feature in the August and September issues.