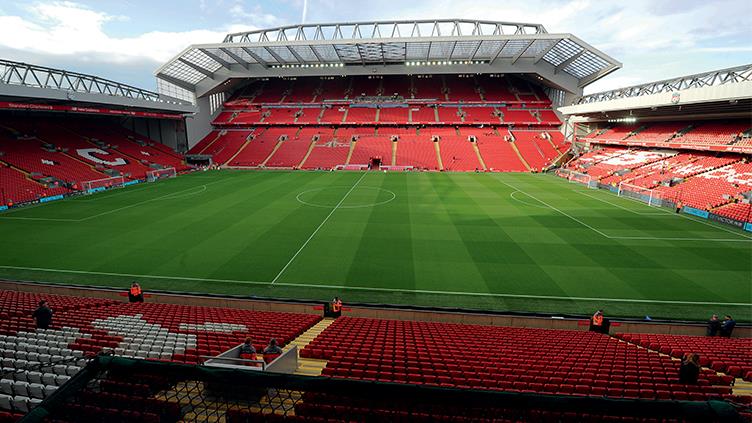 Anfield, the home of Liverpool Football Club, is undergoing a major redevelopment, part of a wider £260m scheme to regenerate one of the city's most deprived areas.

Founded by John Houlding after he broke away from the board of Everton FC to form a new club in 1892, Liverpool FC has become one of the most successful clubs in Europe.

In 2012, current owners Fenway Sports Group announced that Liverpool FC would remain at its historic home rather than build a new stadium and decided to redevelop the Main Stand to meet growing spectator demand, adding 4,500 seats.

The Main Stand, which dates from the early 1900s, was revamped over two years and opened in September 2016 (see box below).

During the 2017 close season -- the 12-week period in the summer when there are no football fixtures -- construction work continued at the stadium. The club laid its first new pitch since 1999 to improve the playing surface and added a further 470 seats to the Kop Stand, adjacent to the Main Stand. To improve accessibility for fans with disabilities, wheelchair bays were increased from 195 to 250. At the same time, development was completed on its new flagship shop. 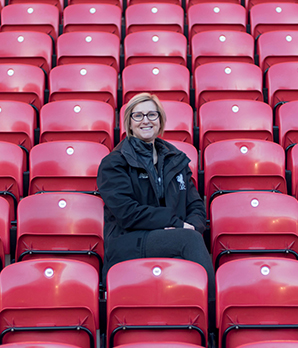 As Liverpool FC's biggest and most complex site, Anfield Stadium is the main, but not sole, focus for Gillian Wood, its senior health and safety manager. She oversees all of its sites, which include the Academy for young players, Melwood Training Ground, seven retail stores, a distribution centre, the head office, a London office, Liverpool Ladies and its official charity, Liverpool FC Foundation.

A primary responsibility of the post is to ensure Liverpool FC, as client of a project, discharges its duties under the Construction (Design and Management) Regulations 2015 (CDM).

During the close season, key individuals, including the stadium management team, project managers, and the events team, hold a weekly meeting to discuss the work.

When the Main Stand opened 16 months ago, there were over 300 contractors still here on practical completion date

"My role is to sit in the meetings [with all the parties involved] and act as an adviser," Wood says. "My team will do ongoing monitoring of contractors."

The last close season when a new pitch was laid was particularly challenging. Due to the volume of work on the stadium interior, including expanding the Kop's seating, the stadium bowl was shut to staff.

With so much construction work under way, a significant challenge lay in managing the site once building work was completed.

"When the Main Stand opened 16 months ago, there were over 300 contractors still here on practical completion date," Wood says.

"Those contractors still considered it to be a construction site. However, once the papers were signed, we had to stop the work, and next morning we did a mass induction of all contractors. I stood in front of all of them and said, 'This is no longer a construction site, it's a working building. You are working under different rules now'."

When Wood joined Liverpool FC on 1 September 2015, she wrote contractors' procedures, audited the risk assessment process and reviewed the reliance on consultants.

Looking ahead, she proposed a bespoke OSH management system, which was backed by Liverpool FC. The launch is planned for later this year.

Within a year, Wood was promoted to senior health and safety manager. Professionally, she has also grown. "When I started, I was grad IOSH. It took me six months to get my chartered status. The environment is so diverse, I found evidence so easy to obtain." 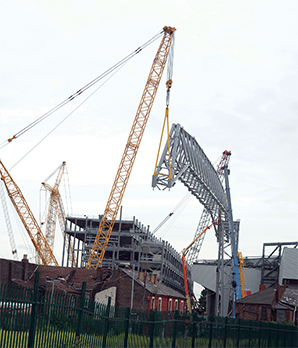 Nevertheless, she admits that in her first few months in post, the perception of her profession was very much of "the health and safety police".

"I think it took a while for people to understand that my approach isn't like that," she says. "My starting point is never to say 'no'. It's always, 'Let's see if we can do it safely'. We may arrive at 'no' but usually we find a safe way to say 'yes'."

A case in point is when the academy staff and a few former players organised a match with the Royal Air Force (RAF) and requested a military helicopter to fly to the academy and drop off the game's ball. The pitch that was originally proposed for use was made of AstroTurf and deemed unsuitable. However, after securing another pitch and approving the RAF's risk assessments and method statements (RAMS), Wood gave the green light for the "ball drop" to proceed.

"It was all over in five minutes but there was a huge amount of planning that went into it," she says. "The RAF did a reconnaissance before. They came out and looked around, made sure there were no overhead wires, nothing that would impact on the helicopter. We couldn't tell the public about it because then it would become a major event and the police must be involved."

The football industry has focused mainly on crowd safety after tragedies such as the Bradford City stadium fire in 1985 and the crowd crushes that occurred at Glasgow Rangers' Ibrox stadium in 1971 and Sheffield Wednesday's Hillsborough stadium in 1989 when 96 Liverpool fans died.

Wood says that, for safety and health, football is considered low-risk in comparison to more hazardous sectors. "But we do have some high-risk activities."

Contractor management has been a challenge. When Wood started she audited the accreditation process. "Part of our process now is [that] any contractor that wants to work with us needs to be part of [prequalification cross-recognition scheme] Safety Schemes in Procurement (SSIP). They need to have safety accreditation before they can work here. We had good relationships with our existing contractors, so we worked with them to achieve it if they didn't already have it." 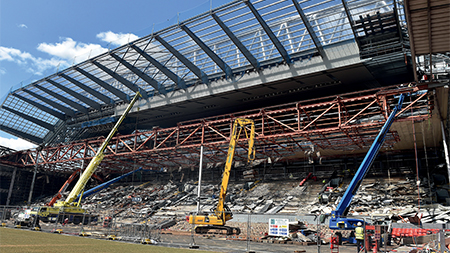 She also worked with all the project managers to sign them up to the new work methods. It took around two years because they had to run courses to educate managers about CDM and its importance. She also offered to help contractors to achieve accreditation.

"That's been a huge win for me," she says. "At least I know when they come in we have done our due diligence. We can prove that we have looked at their accreditation. It doesn't mean that individuals work safely; we still monitor them. Most will, but we do get the odd individual who won't and it is usually around work at height."

Liverpool FC permits only short-duration access for ladder work and carries out regular ladder tagging and checks. One of her biggest successes with contractors is the club's window cleaner. After Wood helped him to become safe contractor-accredited, he is now in a position to attract more clients.

"He was always safety conscious but he uses safe working-at-height methods now," says Wood. "He puts the harness on and makes sure he's clipped on. He cleans the stadium bowl, including the match day control windows."

Wood heads a three-person team. In January 2017, she was joined by a health and safety officer, who writes fire risk assessments and conducts site visits and OSH audits. The same month, she took on a desk-based health and safety co-ordinator, who manages the contractor database. 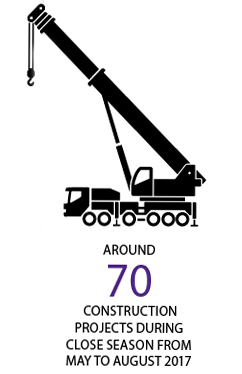 "He came from our retail store and has been working at Liverpool FC for about three years," she says. "He approached me and asked, 'How do you get into health and safety?'. He has a law degree and applied for the role. I was so impressed by his attitude that I took a chance on him and put him through IOSH's Managing Safely [training course].

"He had never heard of SSIP but I can confidently say that he knows what to say to contractors. He will email them for their RAMS. He will look at them and let them know if they are not adequate."

Wood's ambition is for Liverpool "to become leaders in health and safety for the industry". The bespoke OSH management system she procured will standardise work at all sites and departments.

"We are trailblazers on this," she says. "We are working with a software provider and I am having a particular risk assessment module written for me, so that the risk assessment process that I put in when I joined will be the same on this system."

Besides risk assessments, there will be modules for contractor management, accident reporting, audits, action plans, fire risk assessments and control of substances hazardous to health.

"The beauty is that it will be bespoke for football. I don't think it is commonplace for those in this industry to have an OSH management system," she says.

Wood explains that nominated health and safety representatives will be allocated OSH assignments. She cites her OSH team who will upload an audit action plan on the system for all departmental teams to complete. The health and safety representative can then log on and see what actions are required. Each team will be given a specific time to complete the actions. If they fail to accomplish these, they are given two reminders before the line manager is copied in. 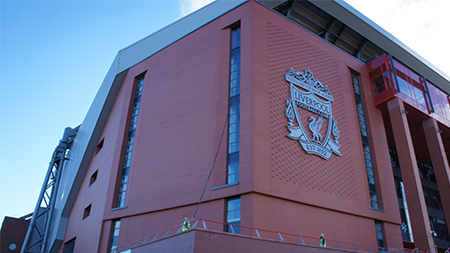 "We hope to align all line managers to this," she says. "That's how it will work. It's making people accountable and owners of health and safety."

She acknowledges that other companies have similar systems and that it is nothing new. "But for me, many were generic or for high-risk environments like construction, civil engineering and nuclear," she says. "It means we'll have one system in place. At the touch of a button, we'll know how many people we have trained this month, how many risk assessments have been completed and how many actions are outstanding."

Another of Wood's objectives was to develop a health and safety committee for Liverpool FC, which was launched in early 2016. Wood chairs the committee which meets quarterly and draws on representatives from all sites. Each site has its own subcommittee, which convenes after the main meeting.

She has also overseen the development of a bespoke IOSH Managing Safely course for exhibitions and events. Since January 2017, 35 duty managers have been trained. 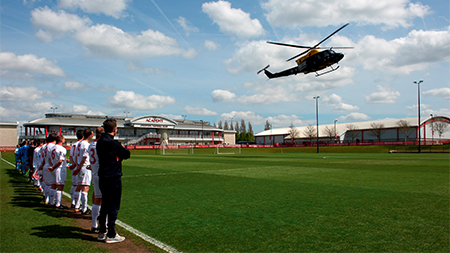 Wood's role does not extend to match days. When the focus switches to crowd safety, the match day safety team assumes responsibility and operates under the Safety of Sports Grounds Regulations 1987. Even so, she helps the team with risk assessments, training on fire evacuation and risk monitoring. She also helped to formulate a new risk assessment process, which is dynamic and accounts for developing scenarios.

Behind the scenes, Wood helped to introduce a safe viewing section for a gantry in the Main Stand, which is used both by fans with disabilities on match days and visitors taking part in the new free-flow tour. Introduced in 2017 to replace the guided tour, it enables fans to walk around designated areas of the stadium with headphones. Safety of the gantry area had to be secured first.

"The problem was that the barrier, at 1 m high, was too low to stand in the area," she says. "It met with the green guide for accessibility for fans with disabilities but it didn't meet with our legislation [for tours]. What we had to do was make the barrier higher for non-match days but so it could be dropped down for a match day so it wouldn't interfere with the fans' sightlines."

An external engineering team designed a barrier that lifts up and screws into place with a key for non-match days.

Wood admits football has a particular culture, which could be deemed challenging if you don't adapt well. Her achievements show she has thrived in the environment. Her advice to others who may be tempted to a safety role in football: "You must have a good sense of humour and not take yourself too seriously."