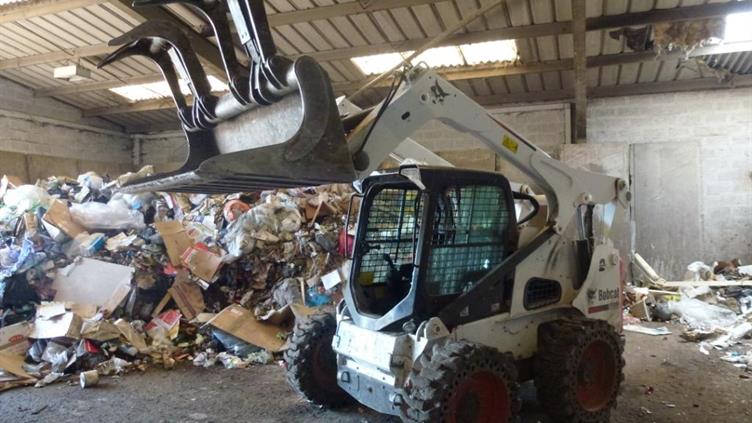 A Derbyshire-based waste and skip hire firm has been fined £136,000 after a worker was crushed to death by the bucket of a motorised loading shovel.

As we reported last month, 24-year-old Ashley Morris sustained fatal head and spinal injuries in June 2013 when the bucket of a Bobcat-branded loader he was operating fell on top of him. The bucket was raised with only the hydraulics holding it in place. Morris, who was operating the controls from outside the cab, reversed the loader and the bucket descended and crushed him. He was taken to Queen's Medical Centre in Nottingham where he was pronounced dead.

Inspector Hornsby described this practice as "very strange", adding that inspectors couldn't establish why Morris was manoeuvering the Bobcat in this way. She said that when the executive investigated further and found more than 200 examples of unsafe working practices involving the Bobcat, forklift trucks and skip lorries, it seemed likely that he didn't know any better.

In the 10 days leading up to the accident CCTV cameras recorded people being lifted up in the bucket of the Bobcat, workers jumping out of the way to avoid being hit by the Bobcat as it turned, and people standing inside a skip as it was loaded with rubbish.

"There was a complete litany of terrible, terrible practices, all of which had the potential to cause either death or serious injury," Hornsby said.

The HSE concluded that Rainbow Waste Management's training regime was inadequate. The defense disputed this issue at Derby Crown Court because Morris was qualified to operate the Bobcat. "Rainbow Waste Management, probably even to today, think that they've done suitable and efficient training whereas in our opinion they hadn't," Hornsby revealed.

The company pleaded guilty to breaching Section 2(1) of the Health and Safety at Work Act, which requires employers to ensure the health, safety and welfare at work of all employees. Under the new sentencing guidelines for health and safety offences, which came into force on 1 February, the judge concluded that culpability was high and the risk of harm fell under category 1 of level A. The organisation was classed as "micro" (turnover less than £2 m) so the starting point for the fine was £160,000 with a range from £100,000 to £250,000. The judge applied a discount for the early guilty plea and Rainbow Waste Management was fined £136,000 and ordered to pay prosecution costs of £64,770.

"He [the judge] concluded that the offender 'fell far short of the appropriate standard by failing to put in place recognised standards in the industry, namely effective monitoring and supervision'," Hornsby said, "and that the breaches on the CCTV were 'indicative of practices which went on for a significant period of time'. In relation to harm, he said it was important to understand that the company was not just being prosecuted for the death of Mr Morris but for consistent disregard for workers' safety and that half a dozen workers were being put at risk."

The company argued that its health and safety consultant and senior managers such as director Christopher Hill were not aware of the practices going on. However the judge said: "I find the suggestion that Mr Hill was unaware of the practice that was taking place at his warehouse but a few yards from his office as depicted on CCTV as implausible and bordering on incredulous."

The judge also commented on the period of time the unsafe working practices had been going on for, Hornsby said: "'In the circumstances it flies in the face of common sense to approach this case on the basis that the breaches viewed and seen on the closed circuit camera over the eight-day period should be viewed in isolation. It is evidence from which the court is entitled to conclude that there was a culture of non-adherence with health and safety regulations over a longer period.'"