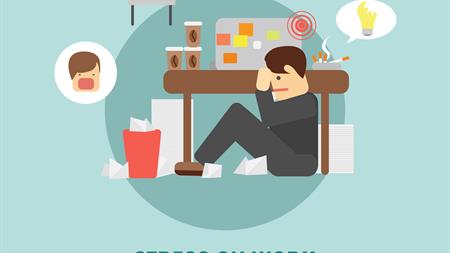 Training line managers to have honest, supportive conversations with staff, and the knowledge to signpost people to specialist sources of mental health support if necessary, is an important part of how employers address the psychological aspects of workplace health and wellbeing, says the personnel managers' body.

Rachel Suff, employment relations adviser at the CIPD, said: "It's particularly disappointing to see such a low level of training by employers for line managers in how to manage and support people with mental health problems. Line managers play such a crucial role in an employee's experience of work, and are often the first line of defence is terms of spotting problems and supporting individuals should they ask for help.

"A lot of it is simply about employees feeling that their line manager cares and will support them if they said 'I need to talk'. However, line managers are not counsellors and will need training themselves if they are to feel confident and competent to create this 'open' culture and support and manage employees with mental health issues. This should be a starting point for employers."

The new research found that in 2016 almost one third (31%) of the employees surveyed said they have experienced a mental health problem at some point during their working life, compared with 26% when the CIPD carried out a similar survey in 2011.

The report described these findings as "disappointingly low" but acknowledged that they have slightly improved compared with 2011's statistics, when 37% of respondents said their organisations supported employees with mental health problems "well" or "fairly well".

Just four in ten (44%) employees said they would feel comfortable telling their current manager or employer if they were stressed or experiencing mental health issues, a similar proportion reported in the 2011 survey (41%). Of the 101 employees who described their mental health as "poor", employers or managers knew about just 43% of cases.

Approaches such as phased return to work, access to flexible working, access to occupational health and counselling, and an employee assistance programme are provisions favoured by those organisations which do provide support to manage and help people with mental health problems, the poll revealed.

However, the CIPD has urged employers to consider using prevention techniques that promote good mental health, in addition to the "reactive" approaches for when someone is already experiencing mental health issues. Such preventative measures include line manager training, as well as resilience or mindfulness training and having mental health champions to raise awareness of the importance of mental health at work.

Almost three respondents in ten (28%) are unaware of the support offered by their employer to people experiencing problems with their mental health. This could be either because of a lack of support or because support is not effectively communicated across the workforce.

Emma Mamo, head of workplace wellbeing at mental health charity Mind, which supports the report, said: "Despite the increased awareness of the importance of addressing this issue, there's still a long way to go, with 42% of respondents in this survey reporting that they don't think that their employer fosters an open and inclusive working environment.

"In order to create a mentally healthy workplace, we recommend that employers put in place a comprehensive strategy to help people stay well at work, to tackle the root causes of work-related mental health problems and to support people who are experiencing a mental health problem in the workplace."

The CIPD commissioned the survey in June this year, after its 2015 Absence Management survey found that two fifths of organisations claimed an increase in reported mental health problems in the past 12 months.

The survey also highlighted differences in gender: women are less likely to describe their mental health as "very good" (28%) compared with men (33%) and are more likely to have experienced a mental health problem while in employment (women: 36%; men: 26%).

The 55-plus age category reported a lower prevalence of mental health problems (23%) compared with other age groups -- a "surprising" finding, the report said, given that it could be assumed that older people may be more likely to have experienced a mental health issue at some stage.

The report concluded it makes good business sense for organisations to be mentally healthy. The total cost to employers of mental health problems among their workface is estimated to be £26bn a year, it said. This figure includes £8.4bn in sickness absence costs and £15.1bn in reduced productivity.

"If people have good mental health, and feel supported during times of poor mental health, it is not a leap to assume that they will feel more motivated, engaged and productive at work," it said. "The urgency with which employers should be addressing this agenda will only increase, and not abate, in the years to come."