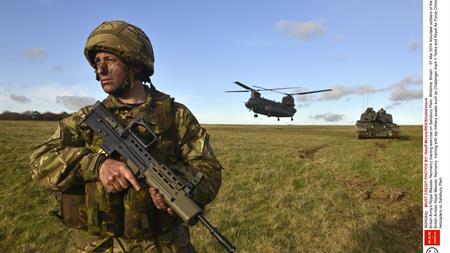 In a report in The Guardian, leading solicitors argued that the government's intention to extend combat immunity for the Ministry of Defence (MoD) to negligence claims could result in allegations of faulty equipment being hushed up. It follows a series of cases of combat-related claims that alleged poor equipment or training.

Before Christmas, the defence secretary Sir Michael Fallon announced the government's plans for an enhanced compensation scheme to replace civil claims. This followed a statement in October that the military would opt out of sections of the European Convention on Human Rights (ECHR) in future conflicts. The MoD justified the decision, saying it would block an "industry of vexatious claims".

In late 2014, the Policy Exchange think tank published a report, Clearing the Fog of Law, outlining how the Human Rights Act, which incorporates into British law the rights set out in the ECHR, has prompted a "significant rise in legal action against the military".

Citing a number of successful actions taken under the act between 2011 and 2014, the authors called for Crown immunity in tort to be restored, protecting the MoD from financial penalties. At the time, Fallon did not discount the government introducing legislation.

Law Society president Robert Bourns told The Guardian: "The Ministry of Defence wants to make it impossible for soldiers and their families to bring claims against it to court when these relate to actions in combat. Any claimant would only have recourse to an internal MoD compensation scheme that would rule on cases brought against itself."

Under the government's consultation proposals, former or serving personnel who are injured -- or the families of those killed -- in combat through MoD failings will be awarded compensation "equal to that which a court would have awarded if the government had been negligent".

Under the proposals, the compensation process will not involve public hearings. Retired judges or experienced lawyers appointed by the MoD will assess cases. Appeals against decisions, however, will be made to an independent tribunal.

Claimants will still be able to bring cases against the MoD that relate to incidents outside armed conflict or peacekeeping operations. Claims that involve human rights will also still be allowed to go to court.

The latest scrutiny of the military's handling of incidents comes nearly a year after the House of Commons' Defence Select Committee recommended reversing the MoD's exemption in the Corporate Manslaughter and Corporate Homicide Act. Such a decision would leave the MoD open to prosecution as a corporate body and cases relating to service personnel killed during training could be heard independently.

However, the government's official response, published on 6 July 2016, dismissed the proposed amendments.

The government said that if there was a fatality in a training exercise, the MoD always implemented any corrective measures identified by the Health and Safety Executive.