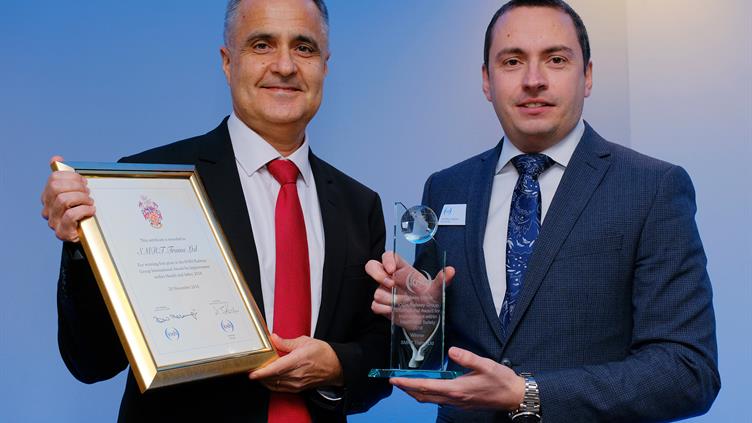 The innovative trolley, used to monitor tracks for rail wear, weighs about 30kg and can be transported by two people and pushed continuously with minimal effort, eliminating the risks of musculoskeletal disorders and slips and trips for workers.

The firm has now won the first prize in the Institution of Occupational Safety and Health's (IOSH) annual International Rail Awards. The award was presented at IOSH's Rail Industry Conference in Manchester to Jean-Francois Chassin, Vice-President at SMRT.

The maintenance team only has a 150-minute window to do track inspection every night and the trolley can inspect a 5km stretch continuously in one operation -- about five times more than was previously possible, when workers had to go on the tracks and measure rail wear manually using a handheld tool at fixed sampling interval in humid and low-light conditions.

Jean-Francois told the conference that being able to test much more track not only reduces risks faced by workers, but also significantly lowers the possibility of disruptions for trains and even derailments.

He said: "We are delighted to win the award. By acquiring the trolley, we took away the excessive manual motion required to do track inspection, and significantly lower the risk of train service disruptions due to track faults.

"The use of the new laser track trolley has also helped us streamline our process, allowing us to better plan our manpower and financial resources."

The award was presented, at the 20 November event, by IOSH Vice-President Jonathan Hughes. Two other awards were presented, one to VolkerFitzpatrick and the other to Network Rail.

VolkerFitzpatrick's award was for a project it ran to reduce the safety risks posed to pedestrians and operatives who were in the vicinity of a mobile plant.

Network Rail picked up the other prize for tackling the issue of trespassing among 11 to 18-year-olds, an age group where it had been identified as being particularly prevalent.

It introduced a number of measures in the summer of 2018 and a new public campaign, called You versus the Train. This was a one-minute video with associated material which featured the true story of someone who was electrocuted on the railway.

He said: "It is clear from the entries that organisations are using the latest technology innovatively to enhance the ways they protect workers and the public.

"While our railways are much safer than in years past, there are still many risks present. So, it is crucial that we continue to strive for improving health and safety systems to prevent accidents and instances of ill health.

"I congratulate our award winners and applaud all those who submitted entries to the awards and commend their dedication and commitment. I would also encourage others to follow their example."