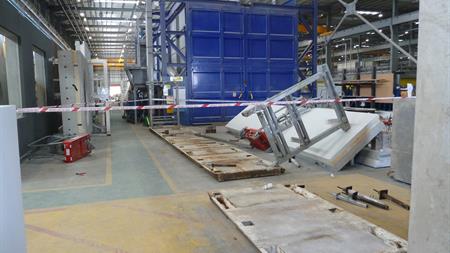 Nottingham Crown Court was told on 16 October that Explore employee Richard Reddish was working in a mobile elevating working platform (MEWP) in the finishing area of the company's Worksop factory when the accident happened on 8 July 2014.

An investigation by the Health and Safety Executive (HSE) found that Reddish had been removing lifting attachments from the top of a panel, which was stored on a transport pallet.

As he was standing in the MEWP's raised basket, the panel started to topple and struck the platform, throwing him out. A domino effect caused more concrete panels to topple, one of which fell on to Reddish, crushing him.

The court was told that Select Plant Hire had supplied the metal transport pallets and shared responsibility for their maintenance with Explore.

The HSE found the frame that should have secured the panel had not been properly attached. This was due to an H-shaped locking pin being incorrectly reinserted after the frame was replaced.

There was no system of pre-use checks. The pallets on which the panels rested were in a poor condition, with important defects, which included missing internal supports.

The investigation found that freestanding panels stored in the finishing area should have been secured in storage racks. Inspectors identified general problems with the panel storage systems at the site. There was also a lack of planning.

Explore Manufacturing, of Dartford, Kent, pleaded guilty to breaching s 2(1) of the Health and Safety at Work Act.

Select Plant Hire, which has the same address, accepted that it had failed to properly maintain the transport pallets at the Worksop site.

After the case, John Green, safety director at Laing O'Rourke, apologised to Reddish's family and friends. He said the group had "learned significant lessons and implemented changes to our operations to continually improve the safety of our working environment".