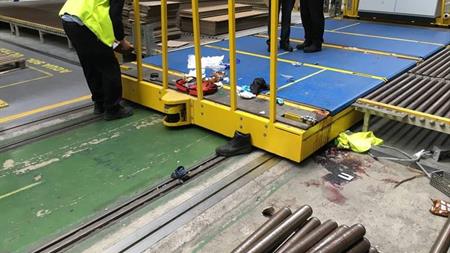 The worker, who gave the Health and Safety Executive (HSE) permission to release the picture from the scene (above), was walking along Saica Pack UK's factory floor when his leg became trapped between an automated vehicle and a conveyor. The vehicles, known as transfer cars, are used to move product around the factory and onto a conveyor system.

Though the company purchased the Hartlepool site in 2008, it had failed to assess the risk of injury from contact with the transfer cars until nine years later -- only a month prior to the incident, HSE investigators discovered.

An assessment carried by an external consultant in August 2017 highlighted several areas where remedial action was required and made it clear how far short the site was from compliance with the company's own 'group wide' material handling system standard. The company had failed to ensure that the standard was adopted at the Hartlepool site and very little had been done to control the risks associated with the transfer cars.

A worker was left with serious life-changing injuries because of this incident. Injuries which could have very easily been avoided, had the recommendations made in the assessment been acted upon

Saica Pack UK admitted "failing to ensure the safety of employees in that the passage of pedestrians where there was a risk involving transfer cars", contrary to s 2(1) of the Health and Safety at Work Act. As well as the £60,000 fine, it was ordered to pay costs of £1,512.

Teesside magistrates also heard there were also failures in instruction and training.

Speaking after the hearing, HSE inspector Jonathan Wills said: "A worker was left with serious life-changing injuries because of this incident. Injuries which could have very easily been avoided, had the recommendations made in the assessment been acted upon.

This isn't the first time the manufacturer has been prosecuted for safety breaches. It was fined £40,000 in November 2016 after it was found guilty of two breaches of the Health and Safety at Work Act.

In 2012 Saica Pack was fined £13,000 after a 66 year old worker sustained a double skull fracture when the fork of a forklift truck struck him on the head.

And in 2010, a subcontractor was killed at Saica Pack's Thrapston site in Northamptonshire when he fell off a cherry picker. The company wasn't prosecuted for this incident.