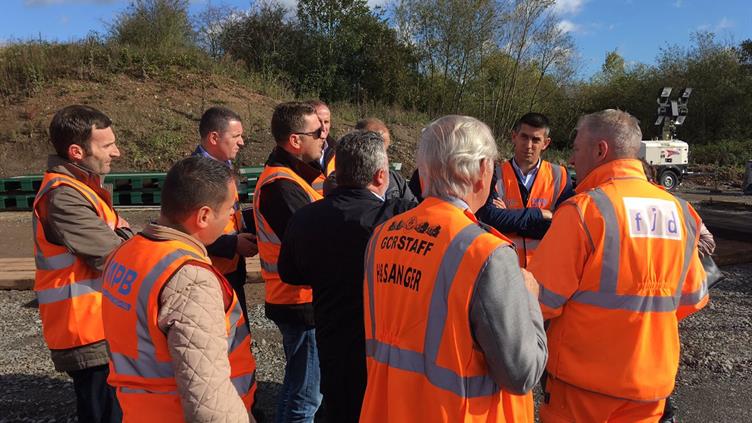 Representatives from three organisations were shown around key rail sites and businesses and met with experts from the UK's rail network during their visit, arranged by the Institution of Occupational Safety and Health (IOSH).

The trip, which took place from 2-6 October, was the second project arranged as part of a partnership between IOSH and the European Bank for Reconstruction and Development (EBRD).

The aim was to share health and safety knowledge, management and practice between Kosovan rail organisations and counterparts in the UK.

The EBRD is supporting the upgrading of the southern section of what is known as Rail Corridor 10 in Kosovo (linking the Kosovo-Serbia and Kosovo-Macedonia borders), which the three visiting organisations are working on together.

Delegates explained that significant progress has been made in reforming Kosovo's rail sector but some challenges remain, especially in the areas of level crossings, contractor management and track side maintenance, which were the focus of the visit.

They visited Bombardier's rail maintenance depot, the Great Central Railway and its recently-lifted bridge, and a level crossing. They were given an explanation of IP signaling by Network Rail and Collis Engineering and they also heard from IOSH Railway Group members working for national rail organisations.

Members of the delegation said they were confident they will be able to enhance health and safety in Kosovan railways following the tour.

Refet Citaku, from Infrakos, said: "We took many ideas from our visit, including revising our internal regulations and improving train facilities for disabled people.

"We will share our experience to the rest of the staff who did not have the chance to participate in this study tour."

Afrim Mehmetaj, from the Kosovo rail authority, said: "During our visit in the UK, we learned some practices dealing with health and safety issues. These include training on level crossings and maintenance of rolling stock. We hope to implement some of what we have learned in Kosovo's railways.

"It was great to have the opportunity to meet professionals from the UK's railways as they have excellent health and safety standards. Kosovo is a new country and we'll try to implement some of the best practices we have learned."

Sefedin Sefaj, from Trainkos, said: "We will now be able to develop strategic planning parallel with economic and industrial planning in Kosovo.

"We enjoyed the opportunity to learn how health and safety is managed in the UK. Being able to speak with people involved in this can only help to make our own rail network safer."

IOSH signed a memorandum of understanding with the EBRD in June 2016, with the aim of working together to effect positive change in transition countries by helping build professional and organisational capability in a number sectors.

"Capitalising on our members' expertise, and transferring existing sector-specific good practice across borders to tackle recurrent risk areas is at the heart of IOSH's WORK 2022 strategy," said IOSH President Graham Parker. "We thank IOSH Railway Group Chair Keith Morey for his efforts and IOSH members working in this sector, without whom this project would have not been possible."

IOSH Railway Group Chair Keith Morey said: "This is an excellent opportunity to collaborate with rail networks from other countries. The delegates from Kosovo were very engaged and interested in what we showed them."

Derran Williams, Senior Health and Safety Advisor for the EBRD, said: "Following the closing meeting at the end of the study tour, it was clear to me that the IOSH Railway Group will undoubtedly leave a lasting impression on the Kosovo delegation.

"The delegation seemed to also appreciate that safety doesn't always need to cost money and small things can make a big difference. Now that connections have been made between both groups, I hope dialogue between the IOSH Railway Group and the Kosovo Rail Sector continues."