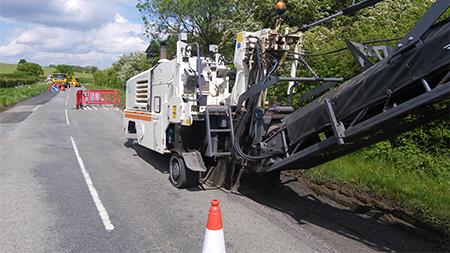 Kier's subcontractor Sean Hegarty was also fined £75,000 for its role in the accident, which took place on a stretch of the B1063 north of Lidgate.

The principal contractor had employed Sean Hegarty to repair the road surface under a contract it had with Suffolk County Council.

A Health and Safety Executive (HSE) investigation found that on 13 May 2014, Hegarty workers were using a road planer to remove the old tar from the southbound side of the road, while the northbound side had traffic lights to control the direction of the traffic.

The driver of Hegarty's flatbed lorry saw a roadworker lying in the road. The employee was taken to hospital, but died of his extensive injuries. The HSE and Suffolk Police said that nobody witnessed the incident and although it was possible a motorist was involved, they could not speculate.

The HSE investigation found both companies had failed to design and plan the roadworks properly so that the road workers and members of the public could move safely around the road surfacing work without the risk of being hit by moving vehicles.

Kier Integrated Services, pleaded guilty to breaching s 3(1) of the Health and Safety at Work Act at Ipswich Magistrates' Court on 19 December. The Kier division was fined £1.8m and ordered to pay £12,405 in costs.

Felixstowe-based Sean Hegarty pleaded guilty to breaching s 2(2) of the Health and Safety at Work Act. The company was fined £75,000 and ordered to pay £12,405 in costs.

HSE inspector David King said: "The planning of roadworks needs to start by considering the design, and how road workers and members of the public will be protected from moving vehicles, this could mean road closures, reducing speed limits or other measures. Whatever the controls in place, those in the area need to have sufficient space, barriers and controls to ensure the risks to them are minimised.

"In this instance the only control measures in place were cones along the centre of the road, and traffic was allowed to pass at 96 kph, close to the workers who were not provided with a safety zone given the lack of space."