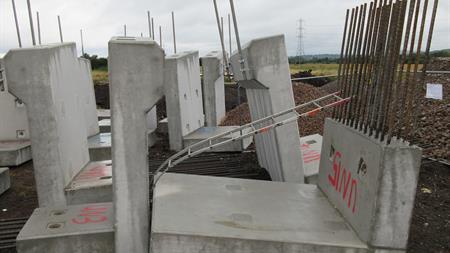 The incident happened at the Maerdy Bridge in Cardiff on 15 August 2016. Kier had been appointed principal contractor on the Network Rail project, which involved building two new bridges using pre-cast concrete units.

Newport Magistrates' Court was told on 17 July that 42-year-old agency worker Peter Walker, who was standing on a ladder trying to remove lifting chains from a suspended 6.93 tonne block, was unsupervised. When an excavator boom moved, the block toppled over, and his leg was crushed between the fallen unit and the concrete block behind it.

The Office of Rail and Road (ORR) told IOSH Magazine that the L-shaped concrete block was positioned on the ground, standing on its shorter side before the accident happened. The unit had four lifting chains attached to it, two at the top and two at the bottom. The other end of the four chains was attached to the excavator's boom.

Walker had first removed the two lifting chains attached to the bottom of the unit before climbing the ladder to around 3 m to remove the two attached at the top. However, the investigation found one of the lifting chains at the bottom was partially detached. Walker was still up the ladder when he gave the signal to the excavator operator to pull the chains free, and the semi-attached chain caused the block to flip over, trapping his lower leg.

The ORR also reported that the excavator had moved its boom while Walker was up the ladder on the previous working day, contrary to good practice, which would be to move to a position of safety while the excavator moved.

Kier Infrastructure and Overseas had pleaded guilty to breaching s 3(1) of the Health and Safety at Work Act at Newport Magistrates' Court on 2 July. District Judge Brown also imposed £25,768 costs.

A Kier spokesperson told IOSH Magazine: "We acknowledge and accept the sentencing decision of the court and regret that on this occasion our usual high standards of safety were not met. As a business, Kier's number one priority is to operate safely and sustainably and this means we continually assess and review all of our safety procedures and work collaboratively with our supply chain and partners to strive for continual improvement and adopt new approaches to safety."