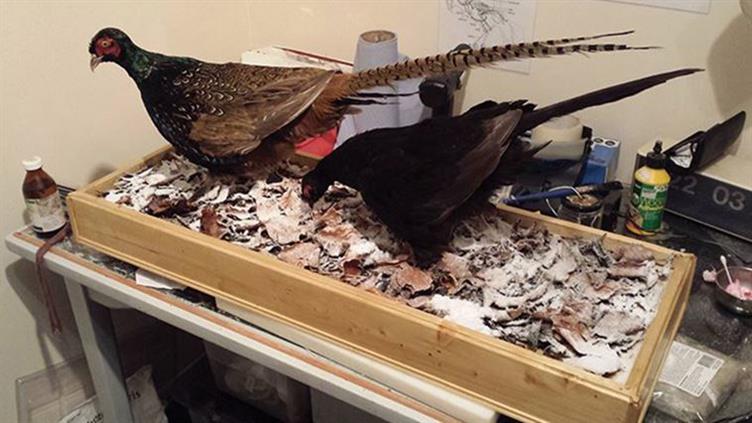 I've been doing it for 23 years now, and I'm pretty much self-taught. I used to do some shooting and I would buy the Shooting Times. There was an advert for a book on taxidermy so I bought it.

My first efforts were a disaster. I worked on a mallard followed by a squirrel. People knew I was interested and they kept delivering me specimens. 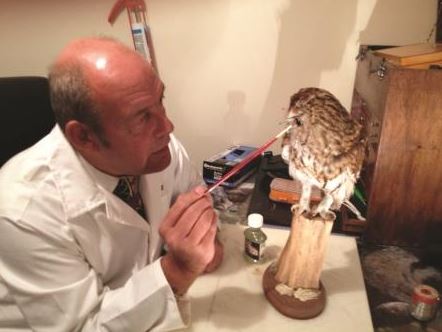 I probably complete one specimen around every six weeks. It requires lots of concentration and time.

People often think the animals are stuffed but they're not. What you do is remove the skin, cure it, then mount the skin on a mannequin. You can buy mannequins or make them. In the old days they used to be made of straw; I use wood wool and bind it with knitting wool.

Ideally you want to start and finish the skinning in one session if possible -- remove the pelt and put it back in the freezer as quickly as possible. It's a very time-consuming job because you need to set the body exactly. I take all sorts of measurements -- eye to eye, eye to nose -- because it's very precise. You need to know the anatomy of the animal so the bones are put in the right place. You also need to know the skeleton so you can put the animal in a natural pose: the whole idea of taxidermy is to have the animal in a pose that looks as though it is alive. I do a lot of wildlife photography, which is really handy for taxidermy, and I have lots of reference books, especially for birds.

I don't sell the animals. I give some away, and sometimes people ask for certain things. Last year, I did a brace of black pheasants and a squirrel for colleagues.

The biggest animal I've done is a fox. The most difficult is a fish. With fish, the skin is very thin, so removing it in one piece is extremely difficult. Then you have to repaint the scales individually, so it's time-consuming and expensive. My favourites are birds: I've done a pair of jays, and owls.

I'm a member of the Guild of Taxidermists and we meet three or four times a year. I've had some one-to-one tuition from a leading taxidermist to give me more confidence.

You can't rush, you can't cut corners, and you must be very precise and do things in the right order. Mistakes are difficult to rectify. I have the same principles in mind when I'm writing method statements at work. I tend to be very, very precise -- I say, we will use this tool, and we will do it this way. People interpret instructions differently. For something like a lifting operation, I'm very clear about how it should be done, so there's no room for interpretation. It's the same with taxidermy: there's a right way to do it and there's no room for shortcuts.

There are hazardous substances to control. You use various solvents and chemicals to preserve the skin. I do most of it in a spare room, except when I'm using an air brush for painting beaks, which I do outdoors. Some of the resins used to replicate water droplets are extremely strong: they can take 16 days to cure. I have to wear gloves, and be aware of zoonoses -- animal diseases that can be transmitted to humans. I also use hypodermic needles.

Taxidermy was popular with the Victorians, but they didn't understand endangered species. Most Victorian taxidermy is in glass cases because they used arsenic and cyanide as preservatives. 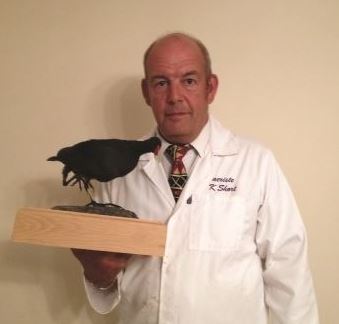 There are some pretty stringent laws and regulations on taxidermy. You have to keep a log book of everything: the species, where it was found, who found it, how it died. People often assume you get specimens by shooting them, but I would never shoot an animal just to stuff it. The vast majority of specimens I receive are roadkill.

You need to pick the right specimen. Birds are forgiving because you can cover mistakes with feathers, whereas with short-haired mammals you have to get the muscles just right.

When I'm working on an animal, I have nothing else in mind; I don't even have the radio on. The concentration is intense but the satisfaction at the end -- to have recreated something that looks alive -- is incredible. I have an owl on my filing cabinet at work and people will say, "Wow -- is it alive?".

It's Marmite really -- you either love it or hate it. When I retire, my ambition is to deal in second-hand taxidermy.