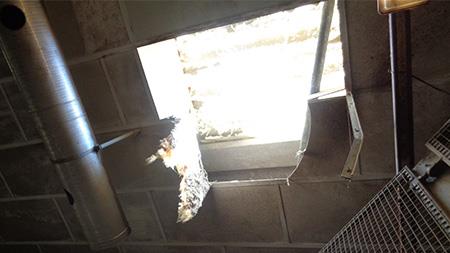 The incident occurred in April 2016 when the workers had climbed up on the roof of a pig processing plant at Karro Food's Malton site to fix the leak over an area where the live animals enter the abattoir.

The roof, made of asbestos cement, had several roof lights set into it made of plastic sheeting to originally allow light into the building. The roof lights were not visible from the inside because of the presence of an inner skin and could not be seen from the outside due to a build-up of moss and dirt that had accumulated over the years.

The accident happened when the two men, who were walking closely together, stepped on the same roof light, which then gave way under their weight plunging them 4 m onto the floor below.

One worker sustained four fractured ribs, a punctured lung and muscular contusions to his outer right thigh. The other sustained a fractured skull, muscular injuries to his right leg and injuries inside his ear which caused ongoing problems with his balance, memory and mental health.

HSE inspector Mark Slater said the company was aware of the fragility of the roof and the presence of the roof lights due to a historic asbestos survey having been carried out. However, the workers did not know it was an asbestos roof or the risks posed by the roof lights before climbing onto it.

"With asbestos cement and asbestos roofs, you have to presume them to be fragile until you can prove otherwise as it is known they lose integrity over time. When work at height is carried out we expect the company to know the state of the roof and carry out risk assessments to ensure safe systems of work are in place," he said.

The investigation found that there were systemic failings in the company when it came to work at height and that although there were health and safety procedures in place, the food manufacture's application had faded away over quite a long period of time.

Karro Food, of Hugden Way, Norton Grove Industrial Estate, Malton, Yorkshire pleaded guilty to breaching s 2(1) of the Health and Safety at Work Act. The food manufacturer has been fined £1.87m and must pay £8,019 costs.

A spokesperson from Karro Food said: "Karro Food accepts the fine imposed by the court following the Health and Safety Executive's investigation and the company's early guilty plea in this case.

"Although the company is disappointed with the fine being set at the upper level of high culpability, given its previous positive record, good character, compliance with the HSE during the investigation and prompt action taken to make improvements to our existing systems and facilities following the incident, we are grateful to the court for recognising these factors in its judgment.

"As a responsible local employer Karro Food has, and continues to, support the two valued members of staff injured in this incident."