K is for Kanban

Kanban is Japanese for a signboard. The board is filled with cards, each representing a product or task, which are then moved across the board as the project progresses. "Kanban is about optimising flow of work through a system," says says software professional Jonathan Headland, who uses it to manage development projects for Thales eSecurity. "Resources available are always less than we would like. We use kanban to deal with unforeseeable events such as system support. It provides transparency and quickly identifies bottlenecks."

Under-resourcing and unforeseeable events; these sound like the problems that most OHS professionals have to deal with. Here then are some examples of how kanban could make OSH tasks more transparent, identify bottlenecks and improve use of scarce resources.

The explosion in 1988 at the Piper Alpha platform in the North Sea was initiated by a pump that required two permits, the status of which was unclear to the operators who switched it on. Some organisations have moved to electronic permit-to-work systems, which makes the status of each permit and piece of equipment clearer, but removes the visual reminders in the workplace. The traditional permit board is visual, but both electronic and traditional permit boards can result in bottlenecks, when more permits are started than can be completed on that shift. 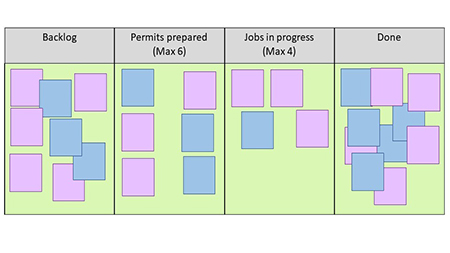 A simple kanban permit board could have four sections -- backlog (or to do), permits prepared, jobs in progress and done (see figure). The done section could be the filing cabinet but, as Headland explains: "Kanban systems encourage the display of completed work as a way of rewarding a job done well and motivating task completion. The physicality of moving a card into the next column is tangible and satisfying, while the progress achieved is prominently displayed."

Key to the success of the kanban version over the traditional one is to limit the numbers of items that can be in each section. For permits you might identify that you can have only four tasks open at the same time. But to ensure there is always work to do, you can have six permits ready to go in the previous section.

In the six months after implementation of the kanban system, accident rates and safety non-conformance reduced and cost management improved

The exact numbers are determined by trial and measurement, counting items in each section at any one time, and the time each item spends in each. If a bottleneck is identified, resources can be switched -- for example, by moving the supervisor from creating permits to carrying out tasks. Each section can be subdivided further, to indicate priorities, for example, or to show resource limitations more precisely. For example, the "in progress" limit might be two electrical jobs and three mechanical tasks.

Kanban can be used to manage accident and incident reporting, with reports raised in the backlog, and then a triage process defined to move a limited number into the investigation column, based on the resources you can allocate to this. Refinements may include set limits on each type of investigation, depending on the expertise needed.

A project in the US combined work and safety information on kanban cards for each task in a construction process (bit.ly/2EhJtDv). No task was allowed to start without the kanban card available, and collection of completed cards focused monitoring of progress and delays. In the six months after implementation of the kanban system, accident rates and safety non-conformance reduced and cost management improved.

Some OHS roles involve a metaphorical round of fighting fires -- sorting out the problems that have arisen today and need fixing, and never seeming to have the time to consider longer-term projects. A kanban approach can help to order priorities.

As each problem is raised, can it be put in the backlog rather than dealt with now? Jobs in the backlog can be reviewed and, when common causes emerge, a single solution might be more efficient. You might finally have the time to get on with that long-term safety culture project you planned.