Just Culture: Restoring Trust and Accountability in Your Organization 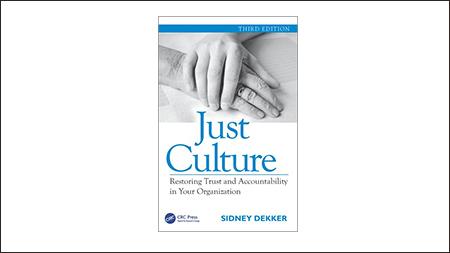 Dekker contrasts two types of accountability: retributive and restorative. 'Retributive' is the approach that seeks out broken rules, and the person(s) responsible, and then pursues retraining or punishment. 'Restorative' focuses instead on who has been hurt, what their needs might be and how these should be met. 'Account' is key to both. In the retributive approach, it's all about holding people to account for their failures; in the restorative, it's more about telling the story ('the account') of what's gone wrong. He stresses though that a just culture does not let people off the hook: both approaches hold them accountable. Benefits include improved morale, higher commitment to the organisation, raised job satisfaction and greater willingness to go the extra mile. He also considers why people break rules, safety reporting and disclosure, the criminalisation of human error and 'what is the right thing to do?'

Dekker is especially good on 'hindsight bias' in investigations; how investigators have the enormous advantage of knowing what the outcome was (they are often only there because of it). As a result, it's very easy to argue that disaster could and should have been foreseen by those in charge. The real world is much more nuanced, and Dekker insists investigators must put themselves in the shoes of those responsible, because what they did almost always makes sense once you delve into what they knew at the time. Investigators, he argues, must focus on what was responsible, not who.

Many of his examples are drawn from the world of commercial aviation. Whatever our sector though, there's a lot to be learned from these scenarios; in flying as in healthcare, safety can be undermined by communication, technical or organisational failures -- or simple bad luck.

He highlights very well the pitfalls of defining 'the facts'. Even when legal people and processes are involved, there is often more than one version of reality and it all depends on perspective and context. Dekker's excellent at articulating the classic dilemma that faces would-be whistle-blowers: if I report, nothing might be done and I could get myself and my colleagues into trouble, but if I don't report, someone could get hurt, and I might get myself and my colleagues into trouble.

Essential (and very readable) material for anyone responsible for corporate policy -- or for investigating what's gone wrong.