You could look at the way I was taught back then and say, "That's dangerous". For example, we learned that if you had an issue with your regulator (which delivers air from the cylinder to the diver), you swam over to your buddy and shared theirs! The reality is you might panic and snatch their regulator, so now everyone dives with two regulators. It's all about redundancy. Equipment has changed and you now have kit to help your buoyancy, both up and down.

There was a long stretch when I didn't dive but I got the bug again in 2004. My daughter was 14 and wanted to do something different. A friend suggested diving, so she tried it and enjoyed it. She travelled the world to go diving. I tagged along and joined in too.

I decided to gain more qualifications. Whoever you learn with -- the Professional Association of Diving Instructors (PADI), Scuba Schools International, the British Sub-Aqua Club (BSAC) -- you start at the bottom of the ladder. I don't like being on the bottom rung, so I rose to the challenge, gaining qualifications to become a rescue diver with PADI before switching to BSAC.

There are two aspects of diving I particularly enjoy. The first is taking people who've never been before and seeing the pleasure they get from it. The second is challenging myself -- for example, diving to a wreck that's accessible only at certain times of day and is a bit risky due to the tides. You must plan very carefully.

The reality is you might panic and snatch [your buddy's] regulator

When planning a dive, you do two types of risk assessment. The first is during the preparation stage when you look at things like equipment weight so that you don't injure your back. The second, which is like a dynamic risk assessment, is the "incident pit". You can visualise the pit as a U-shape. If you fail to check something when you're on the surface -- say, your spare cylinder -- you are already some way down the U. The sides become steeper the further down. If you then find you have no air in your spare cylinder, you swiftly reach the bottom and you're in serious trouble. The point is that, if you do your checks, stay at the top of the U and don't ever go down into the pit you will be OK. It's about planning, preparation and situational awareness at all levels. 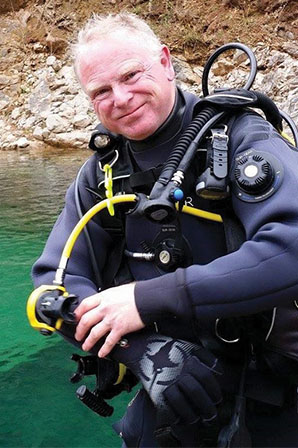 Put simply, you can't breathe water. You need the right support team on the surface and the correct first aid, both oxygen and automated external defibrillator, and to know the location of a recompression chamber and the nearest hospital. You plan the dive and dive the plan. It's like flying an aircraft with pre-flight checks: it takes about 45 minutes to kit up and brief. Anything that goes wrong will be medical, or malfunctioning kit underwater, or nature oriented. I practise rescue skills in the pool and in open water every two months.

One of my best experiences was finding a set of Venetian pots off the Tunisian coast. I spotted something curved, so I dropped down to take a look. They were covered in sea life, so I scraped a small area clean and saw they were pots. They were sitting on the wreck of a 2,000-year-old ship -- an old Venetian galley.

The worst experience was when my co-diver's regulator did a "free flow", which means it didn't turn off. I saw his gauge and he had one-third of a cylinder remaining -- about 30 seconds until he ran out of air -- so I gave him my spare air and we ascended gradually. It was a very measured recovery, but it could have gone horribly wrong if he'd panicked. We were coming from around 35 m and the water temperature was about 4°C. Fortunately, he knew the emergency action plan.

I'd recommend diving to anyone. You can dive from when you're 14, and there's no upper age limit. You need to be physically fit, but disability is no barrier. I'm trained as an adaptive diving instructor, which means I can take out physically challenged trainee divers. When I was in the military, I was stationed in Iraq. We had many battle casualties, some with life-changing injuries. I felt I needed to give something back, and lots of the people I train in adaptive diving are ex-military.

One lad I dived with had sustained a back injury and only had use of his arms. After being helped from his wheelchair he was able to roll into the water. Once in, his disability wasn't an issue. He'd spent two years largely confined indoors. Mentally he had been in a bad place, and diving changed that.