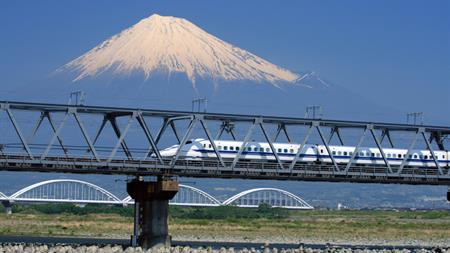 West Japan Railway introduced the controversial training exercise in 2016 after a component had fallen off a high-speed train the previous year. The aluminum part struck the train's body as it passed through a tunnel in southwest Japan and injured one passenger. Investigators blamed the incident on loose bolts and poor inspections.

The shinkansen train (or bullet train) operator said the drills were designed to improve carriage inspections and safety awareness following the incident. The exercises were designed so the workers could "feel" the strength of the winds generated by the speeding trains.

However, West Japan Railway Workers Union, which represents the employees, argued the training programme was dangerous and unnecessary and that it had repeatedly tried to stop it.

The union said that last year it had called on the rail firm to end the exercises eight times.

The BBC reported that members had told the union of their fears of injury from debris and concerns about dust exposure.

The safety drills required groups of trainees, donning hard hats and goggles, to enter a tunnel and squat in a narrow maintenance ditch between the two sets of tracks, which are located a metre away on either side, while the trains sped past. Around 240 employees participated in the exercises, which could last up to 20 minutes, before the rail firm revised its training.

West Japan Railway denied it had stopped the exercise because of union pressure. Starting in November, trainee mechanics will watch the shinkansen trains speed by from outside the tunnel, behind a trackside fence.

The shinkansen network, which runs the length of the Japanese mainland, from Kyushu in the south to Hokkaido in the north, has operated since 1964 without an accident-related fatality.