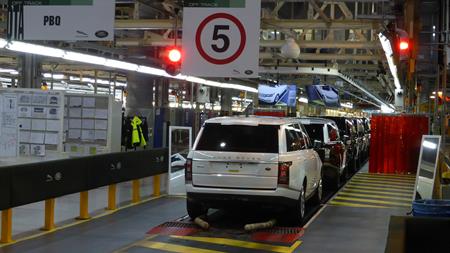 Birmingham Crown Court was told that employee Mark Widnall, aged 59, from Coventry, was carrying out vehicle checks on the production line at the plant on 8 February 2015 when the accident occurred.

A delivery driver, who was covering the shift, was driving a Range Rover Sport vehicle towards the start of the production line, an event that normally happens 48 times an hour. As the driver reached the start of the line, he accidentally hit the accelerator and caused a four-car shunt. Widnall, who was crossing the production line at the time was trapped between the second and third vehicles. He sustained severe injuries and needed an above-the-knee amputation of his right leg. Two other employees also sustained minor injuries.

The Health and Safety Executive's investigation found that the car maker had failed to ensure that the driver was familiar with procedures. It had also failed to separate the workers on the production line from the moving vehicles properly. The company was charged with breaching s 2 of the Health and Safety at Work Act.

The court heard that Jaguar Land Rover's risk assessment had identified a risk of crush, collision with an object or person while moving vehicles up the line in general terms. The manufacturer had imposed speed limits of 8 kph and reduced the vehicles' maximum speed to 32 kph in the final assembly (FA) 1 area. In addition, it had also provided training to the drivers and the workforce to beware of moving vehicles.

However, the court was also told that Jaguar Land Rover had not thought through the extent of what could happen if something did go wrong. For example, if a driver hit the accelerator rather than the brake.

Safety measures were insufficient. Had the company installed a buffer zone to prevent employees from working on vehicles near the line's entry point, it would have eliminated the risk. It installed such a zone after the accident.

Training was found to be inadequate. The company had failed to inform workers that they should not work on vehicles when they were being moved onto the production line, or if they had, they did not comply with that instruction.

The HSE found the driver had not put the previous two vehicles in park mode as he should have done. He assumed incorrectly that the vehicle's electronic parking brake (epb) system would engage when he turned off the engine and opened the door. Widnall said vehicles had been left on the line without the parking brake applied. However, the court heard that he would still have been hit had the vehicle been left in park.

In his sentencing remarks, Judge Philip Parker said that because Jaguar Land Rover had not truly identified the extent of the risk, the car manufacturer had never sought statistics on whether shunts occurred in other factories. While there had been no hard evidence of earlier accidents, there was at least one in the six months following the accident, although there were no serious consequences.

The judge assessed Jaguar Land Rover's culpability as medium because while the company had systems in place, they were insufficient and it had not fully considered the extent of the risk. The seriousness of the harm was a medium risk of level A (death, physical or mental impairment or significantly reduced life expectancy) or a high risk of level B (physical or mental impairment or a progressive, permanent or irreversible condition), placing the offence in harm category 2. The risk, he said, was to anyone working on the lines, and the s 2 breach was the cause of the actual harm.

However, Judge Parker referred to R v Thames Water Utilities and the Court of Appeal's suggestion that organisations which have offended negligently once or twice may face a substantial increase in fine levels. Jaguar Land Rover had two previous convictions.

In the first case, Jaguar Land Rover was fined £30,000 at Liverpool Crown Court for breaches at the company's factory in Halewood on Merseyside on 26 September 2011.

The second case, another incident at the Solihull plant in 2013, involved a 57-year-old maintenance electrician. The car manufacturer pleaded guilty to safety breaches after the worker was dragged into inadequately guarded machinery, suffering life-threatening crush injuries.

In sentencing, the judge said that he had to take the previous offences into account but in the context that Jaguar Land Rover's employees carry out millions of manoeuvres every day.

He also took into account the steps taken by the company to prevent a repeat of the accident, and the fact that the car manufacturer had sought to have an effective safety and health system in place. This included investing significantly into research to identify how it could conduct operations in accordance with its duties under the Health and Safety at Work Act.