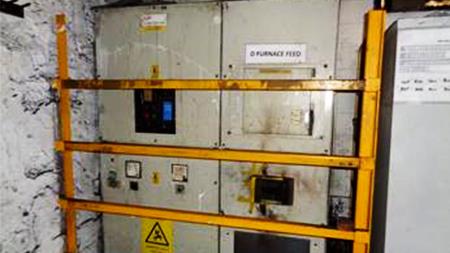 The injured employees were trying to reinstate the power supply to one of the furnaces at BAS Castings' foundry on the Wharf Road Industrial Estate in Pinxton, near Mansfield, on 2 September 2016 when the incident happened.

After contractors had completed furnace repairs, the two employees replaced the fuses. They then shut the door to the fuse panel, which engaged the interlock, a system that monitors the position of the guard or gate to shut off power or access.

The two employees then tried to operate the fuse switch lever but this would not move as it was jammed. They reopened the fuse panel door and used a screwdriver to try to bypass the interlock and operate the fuse switch lever. An electrical flashover occurred as the fuse holders possibly made contact with each other. Both employees were seriously burned. They required surgery after recuperating in hospital for two weeks.

The Health and Safety Executive (HSE) investigation found BAS Castings did not have a safe system of work or a permit system. It had no rules for working with electricity.

The manufacturer had not provided the employees with instructions on how to undertake the work safely. The employees had also been allowed to work on live conductors.

BAS Castings pleaded guilty to breaching reg 4(3) and reg 14 of the Electricity at Work Regulations 1989. The foundry business also had to pay £1,354 in costs.