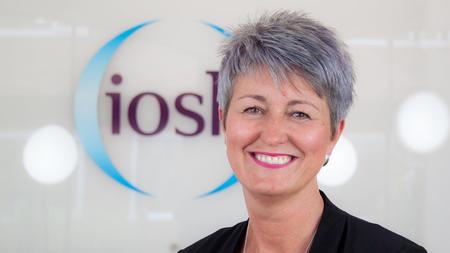 Working with trustees and senior members on IOSH's 2017-2022 plan is top priority for Bev Messinger, who takes up her post today (3 October) following her departure from water regulator Ofwat.

She said: "I was attracted to the role at IOSH as I believe I can make a difference to people's lives. I would like to build on the strong history and credibility of IOSH and take it to the next level.

"Our presidential team and wider membership do a great job in raising the profile of IOSH on the international stage. I intend to support them on this, building strategic partnerships and alliances which can enhance the drive to make workplaces across the globe safe and healthy."

Bev, who takes over from IOSH's interim chief executive Cyril Barratt, also intends to ensure that IOSH members continue to be provided with a responsive customer service and that the institution is modern and agile.

A fellow of the Chartered Institute of Personnel and Development, she brings with her a huge amount of experience in HR and people development. She was formerly senior director -- business improvement at Ofwat. She previously worked at Coventry City Council, as corporate director of customer and workforce services and head of human resources, before becoming acting CEO.

She is also a non-executive director of Northamptonshire Healthcare Foundation Trust and a trustee of Keyring, a national charity for adults with learning disabilities.

IOSH chair of the Board of Trustees Bill Gunnyeon said: "This is an exciting time in the development of IOSH and I'm delighted that someone of Bev's calibre is going to be leading the organisation as we prepare for the implementation of our new strategy next year. I am looking forward very much to working with her to help realise the considerable potential that IOSH so clearly has.

"I would also like to say a very sincere thank you to Cyril Barratt, who has so ably led the organisation as interim chief executive for the past year. IOSH owes him a considerable debt of gratitude and I personally have greatly appreciated the support he has given me since I became chair [of the Board of Trustees] earlier in the year. He takes with him our warmest good wishes for the future."

IOSH has more than 45,000 members working across industry sectors in 120 countries.

Cyril Barratt, who had been interim chief executive since November 2015, said: "It has been a real privilege to have served as interim chief executive of IOSH. It has provided me with the opportunity to see the commitment and dedication of IOSH's members the world over towards our shared goal of a safe, healthy and sustainable world of work, a drive which is shared by the staff who work for the Institution.

"I wish everyone well and I am confident that under Bev's exceptional leadership IOSH will continue to move forward and deliver its new strategy."