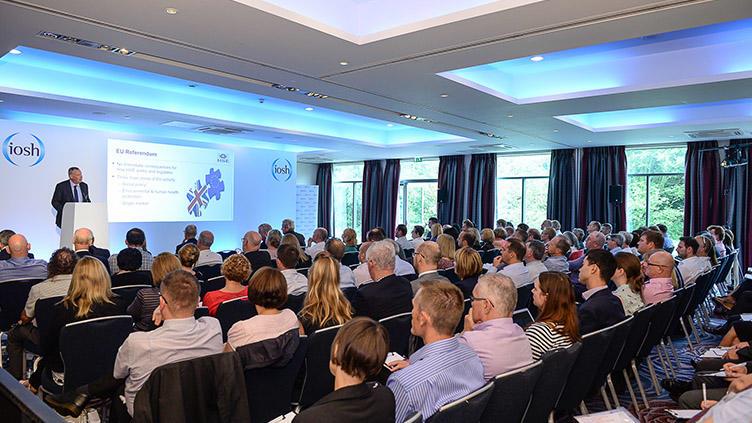 "We want to make sure protection is not reduced as we go forward," Philip White, head of operational strategy at the Health and Safety Executive (HSE) told delegates at this year's IOSH National Safety and Health Conference for the public sector. "But, as we did with previous governments, there is scope to sharpen and improve the regulatory framework."

White reminded his audience at the event, formerly the National Safety Symposium, on 15 September in Nottingham, that the government's better regulation agenda aims for £10bn-worth of regulatory savings for business before the end of the current parliament in 2020. This goal translates into Business Impact Targets for ministries such as the Department for Work and Pensions and their regulatory agencies such as the HSE. He said there had been concern that protection standards were being eroded. "But, as opposed to diluting standards, I think we have filtered all of our regulations and our guidance and made it slightly stronger and easier for dutyholders to understand," he said.

Regulations that have been in place five years must now undergo post-implementation reviews (PIRs). The PIR of the Control of Asbestos Regulations 2012 was under way, he said, and the HSE would soon begin reviewing other past regulatory changes such as those to the injury-reporting regulations to see whether any further amendments were needed.

The executive is considering consolidating some pieces of regulation and adjusting requirements in others. Inspection of plant and equipment was subject to varying standards in different regulations, he noted.

"Some of these things go back into the mists of time," he said, "and the question is whether those [inspection] periods set out in laws or approved codes of practice are risk based. Are they still current today when much equipment is designed and manufactured to much higher standards or where equipment is very rarely used?"

He gave the example of lifts in wind turbines which receive infrequent use and may not need six-monthly thorough inspections.

The executive was also preparing guidance on risk assessments and what needs to be considered in a written assessment, an issue he said had "bedevilled" OSH management. Another was what he called "blue tape" or private-sector gold plating, in which businesses ask contractors to complete long OSH preassessment and prequalification forms.

White said HSE inspectors are now more closely examining dutyholders' health management controls, including those for conditions such as stress and musculoskeletal disorders -- particularly in food and drink manufacturing -- as well as exposure to hazardous substances.

White's former boss, ex-HSE chief executive Geoffrey Podger, agreed in a session that followed that the coalition government's regulatory review had had a largely beneficial effect in simplifying regulation.

"But yesterday's triumphs don't help you very much with tomorrow's problems, so we could be faced with a climate in which people tried to rewrite in the UK the entire health and safety system," he warned.

The trigger for the calls for such an overhaul would be the UK's planned exit from the EU -- "every pub bore's favourite subject" -- which was one of his main themes. He believed that "there is clearly no thoughtthrough strategy at all as to where we are going to end up" but that the imperative to satisfy the part of the electorate keen to limit immigration from EU countries meant that a trade agreement with full access to the internal market and governed by its labour standards would be unlikely.

"It is slightly bizarre that we might have people who would contemplate rewriting the whole thing," he said of the prospect of wholesale changes to UK safety law, since the EU framework directive from which much safety and health regulation derives used the principles set down by Lord Robens in the 1970s in the UK.

Another related issue was that of product standards, where British manufacturers would probably be loath to adopt UK-only safety metrics since they would still have to manufacture goods to EU specifications to export them.

He also warned that the UK could lose a degree of influence in setting standards that it still had to abide by to continue trading with European countries. "It is apparent to those of us that have worked in HSE that the UK has been the major player in the EU in trying to get standards to reflect the best science that we have."

Employers sometimes over-react to incidents involving lone workers and "put lots of things in place which make it impossible to conduct business as usual, or feel cumbersome or create resentment".

She said the ideal was to make staff feel confident and safe without affecting their efficiency. "We don't want to weigh them down with things that are going to slow them down."

Easy-to-manage responses included buddy systems by which colleagues maintained contact with a lone worker -- she noted some organisations use the Whatsapp phone app for teams to keep in touch but electronic tracing and personal alarms could be used too.

Zero-tolerance policies send a strong message to staff and service users about the organisation's attitude to abusive or threatening behaviour, she said.

Wilks Sloan stressed that, whatever systems an organisation adopts, they have to be approved by the staff who will be using them. "Give them the tools they say they need," she said of lone-worker trackers and alarms, "-¦but they won't replace all the other commonsense things you need to do when you go out. It is merely a tool and it is the last thing you use but they are excellent for tracing somebody if you have lost them or if they want to raise the alarm."

She admitted it was a "huge challenge" to insert personal safety into an organisational culture which had been formed without it as a priority "because you have to undo so much behaviour", but it was worthwhile.

Wilks Sloan advocated convening focus groups of teams with lone workers to allow staff to talk about where they feel most at risk and threatening behaviour they have faced. She said such groups often reveal the extent to which workers have normalised putting up with abusive behaviour.

Insulting and bullying behaviour was the subject of another session headed by Helge Hoel, professor of organisational behaviour at the University of Manchester.

Bullying, Hoel said, has been shown by a growing body of research over recent decades to create psychological problems that are akin to post-traumatic stress disorder. "People who have been bullied may have worse symptoms than those who have seen people dying in disasters," he said.

The reason is that the individual's personality is under attack when they are repeatedly abused and their world view is challenged. "The world isn't good, it's a bad place for you," he said, "and it's very difficult to come to terms with if you think you are a good person who deserves to be treated well."

The stress victims feel translates into absenteeism and the intention to leave their employer.

Research by government into bullying among groups that receive special protection under the law found that black, gay, lesbian and bisexual employees and those with with a disability or longterm illness were twice as likely to report having experienced unfair treatment at work.

Hoel noted that older workers, aged 45 and over, reported experiencing less bullying than the under-45s.

People with disabilities were far from a homogeneous group when it came to being bullied, he said. Those with long-term illnesses and psychological problems or learning difficulties reported higher than average levels, but employees with physical disabilities were around the average.

"So it may be that people are being stigmatised for whatever reason when they are long-term ill or have learning difficulties that people find difficult to deal with or to accommodate," said Hoel.

Hoel's own study of the experiences of 77,000 gay men, lesbians and bisexuals found that no gay men said they had experienced regular workplace bullying (at least once a week), though 13.7% said they were bullied occasionally.

Among those in Hoel's study who had experienced bullying, 44% said it had come from their managers and 26% from colleagues. Examples of behaviour classed as bullying in the research included intrusive questions about an individual's personal life, receiving intimidating messages and being excluded from colleagues' social activities. Those who said they were bullied reported poorer health than those who had not experienced discrimination or abuse at work.

Health, safety and risk manager at Loughborough University, Professor Neil Budworth, standing in for Professor Andrew Sharman, led a session on safety and health communications. The starting point in any comms exercise was to understand your audience to know why you are communicating and to choose the right tools. Budworth said it was easy to pitch messages above an intended audience's level with too complicated vocabulary. When he was corporate health and safety manager at German-owned energy producer E.ON his team drew up imaginary profiles of typical employees, with details of their interests and families and backgrounds, so they could have people in mind when they were composing safety messages.

"You need to know who you are talking to, you need to know how they want to hear the message and to be clear about what you want them to do and learn," he said.

Clear communications require that employees do not receive too many messages at the same time, that campaigns reinforce previous ones and that each message is left for the appropriate "resonance time" for the chosen medium. "If you want messages to stay out there, there's a balance," he said. "For me, posters become wallpaper after about two weeks. Sometimes if you can get things on people's desks they will sit there for a little while and people will remember them."

He offered another example from E.ON of a successful campaign to improve road safety that "went viral". The safety team released posters featuring pictures of drivers at the wheel with an inflatable dummy dressed as a pilot in the passenger seat and a strap line warning about the risks of driving in autopilot mode. "We bought 50 inflatable pilots and left them around the office and it got people to stop and look. They put two and two together and went to the [safer driving] website.

"Then a really interesting thing happened: somebody stole one. That gave us an idea and we said 'where can you get these things photographed?'." Employees submitted photos of the inflatables in locations all over the country.

"It was quite an expensive campaign," he recalled, "but it paid for itself within three months."