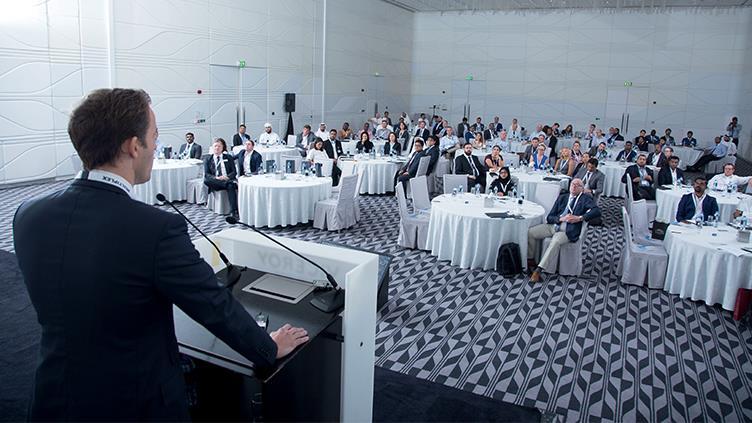 "There is significant evidence to show that asbestos is making its way on to construction sites and into new projects [in the Gulf region]," Charles Faulkner, head of environment, health and safety at asbestos consultancy Anthesis Consulting Group, told IOSH's Middle East Conference in Abu Dhabi on 25 April.

The hazardous material is being used in new buildings across Abu Dhabi and Dubai more than a decade after the United Arab Emirates (UAE) banned it in 2006, Faulkner said. Most prevalent are insulating boards and braided asbestos insulation, as well as cement roof sheeting, cement pipework, gaskets and vinyl floor tiles.

Faulkner raised the issue during a Q&A session with IOSH's president and conference chair, Craig Foyle. He went on: "For the gaskets, we've seen counterfeit materials that claim to be non-asbestos coming from China but when tested in a laboratory they've tested positive for chrysotile white asbestos. Of the braided insulation: unfortunately that can be bought from Alibaba [the Chinese e-commerce company]."

He blamed the problem on a lack of awareness of the risks posed by asbestos exposure and the transient nature of most of the UAE's expatriate population: "As people leave, they take their knowledge and experience with them." He advised employers to "implement a best practice approach to asbestos [-¦] Identify the asbestos risks on your sites, risk-assess it and then have a plan in place to manage that risk."

Keith Griffin, managing director of consultant HSEC Services, gave examples of poor living conditions that have prevailed in Middle Eastern labour camps, housing the region's hundreds of thousands of migrant workers. He told delegates about non-air conditioned bedrooms sleeping up to eight men and recalled one instance of people working 14-hour days from the beginning of their two-year contracts.

The provision of meals was another issue facing the region's migrant workforce living in labour camps. Griffin said he was shocked to discover the "swill" that was being served on one site -- "it was just a bone in water".

During Ramadan one year he visited a camp in Abu Dhabi that had failed to cater to those who were fasting: "Come Sahur [the pre-dawn meal], the kitchen was closed. There were several hundred Muslims lining up for breakfast and there was nothing. People were angry for weeks."

The conference took place less than a month before the start of Ramadan -- which runs from 15 May to 14 June -- and Griffin encouraged delegates to visit the website www.productivemuslim.com for advice on looking after their workforces throughout the month. "Make sure that, if you've got camps, get the diet right and respect the culture," he said.

Griffin reminded the audience that lost productivity due to poor wellbeing cost employers "a fortune" and that the buck stopped with managers.

Multiplex worked with a consultant to develop a bespoke worker welfare management system that addressed legal obligations mandated in local laws in the Middle East, international standards and the UK Modern Slavery Act.

Smith said the system "talks the language of construction professionals", adding: "We've taken away the human rights jargon; construction managers and site managers don't want to hear that. They want something that's process driven, that they can pick up and implement effectively."

Multiplex recently took on 750 migrant workers for a construction project. "More than 3,000 people were queueing down the street," Smith said of the recruitment day. "That's a reflection on what happens when you can promote some really good practices, like the 'employer pays' principle [under which migrant workers are not required to pay recruitment fees]."

The impact of worker welfare on workplace performance was picked up again by Subba Rao Palagummi, a health, safety and environment consultant at Kuwait Oil Company and currently serving as best practices chair for the American Society of Safety Engineers' Region IX.

He told delegates about an incident at an oil and gas processing plant in which an experienced foreman had lit a cigarette inside the facility because he was distracted.

"I visited his [labour] camp, bought him a cup of coffee and asked him, 'What made you do this?' He told me, 'Today is 18 May and I haven't received my salary [which should have been paid on 7 May]. My son and wife are at home and I was thinking about them'."

Palagummi concluded: "Human behaviour is not the root cause of accidents. It is because of some system failure in the management."

Earlier in the day Dr Rob Cooling, vice-president of health, safety, quality and environment (HSQE) at Dubai's upcoming Expo 2020, gave an insight into the challenges of deploying a safety and health strategy that spans thousands of workers on a scheme for which a reported £31.4bn worth of construction projects are currently under way.

The "Better Together" strategy is underpinned by six elements: leadership; communication; competency; engagement; reward and recognition; and continuing improvement. "Leadership is a core strand that runs through our strategy," said Cooling. "You do start with the higher-level vision and it's how that is deployed [...] It's important that these messages get down to the workforce and supervisors in particular."

To ensure the responsibility for safety and health cascades through the supply chain, Expo 2020 organises forums for its safety practitioners, as well as safety, health and welfare leaders' tours. A week before the conference Expo 2020 had delivered the first in a series of leadership sessions on HSQE to about 150 executives from consultants, contractors, subcontractors and project managers.

Its safety leadership team has also developed a streamlined version of IOSH's Leading Safely course because "we really struggle to get people out for a day", Cooling said. "We put together a shorter, three-hour session that gives context about our strategy and then focuses in on leadership [-¦] and the concrete behaviours that we want to see from our leaders."

As part of its welfare programme, Expo 2020 arranges an annual social function. This year it was a cricket tournament and about 4,000 workers watched security technology supplier Transguard beat civil engineering firm Al Naboodah in the final at the Dubai International Cricket Stadium.

Cooling said: "I've been in the region for coming up to 11 years and I've never been involved in a programme that has such a significant focus on worker welfare."