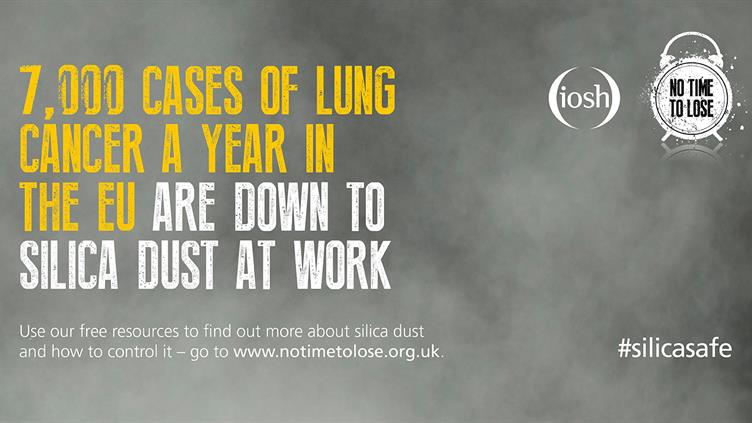 IOSH representatives and other experts and policymakers from across Europe will inform debate during a conference to be staged as part of the Netherlands' presidency of the EU Council.

The Netherlands' Ministry of Social Affairs and Employment will host the 'Preventing work-related cancer, conference on carcinogens' conference at the Europe Building, Amsterdam, between 23-25 May, with the aim of highlighting existing and new insights into the issue.

IOSH's own No Time to Lose campaign to raise awareness of occupational cancer will be presented to delegates by Dr Lesley Rushton of Imperial College London, the lead researcher behind the most recent study into work-related cancer in the UK.

She said: "The exact scale of occupationally-related cancer in the EU is uncertain but could be up to 100,000 deaths a year. In Britain alone it is estimated that over 8,000 work-related deaths occur each year with nearly 14,000 newly diagnosed cases.

"The choice by the Netherlands of work-related cancer as a priority issue for its EU Council presidency provides an excellent opportunity to raise awareness of work-related ill health in general and cancer in particular, and facilitates the development of risk reduction strategies across EU Member States.

"We hope that by presenting the British study, highlighting its use by a range of organisations and showcasing IOSH's No Time to Lose campaign, it will encourage organisations throughout the EU to give their support to the campaign and lead more companies to pledge to take action to reduce and remove exposure to occupational carcinogens."

Topics due to be discussed during the conference include the severity and scope of the issues surrounding carcinogens at work, the sharing of good practice, setting exposure limits and looking ahead to the future.

The EU Commissioner for Employment, Social Affairs, Skills and Labour Mobility, Marianne Thyssen, and the Netherland's Minister of Social Affairs and Employment, Lodewijk Asscher, are among the speakers set to address delegates.

IOSH's support of the conference will see it meet with senior representatives of the European Commission's Directorate-General for Employment, Social Affairs and Inclusion (DG-EMPL) to discuss future collaboration around occupational cancer prevention.

The institution will also hold discussions with the Dutch research organisation TNO to explore how the No Time to Lose campaign can be incorporated within the European Roadmap -- from Amsterdam to Vienna, which encourages adoption of the occupational cancer prevention theme for 2016-19 by several European institutions.

Richard Jones, IOSH's head of policy and public affairs, said: "Given its huge human, economic and societal impacts, IOSH is delighted that the prevention of occupational cancers has been selected as a priority for the Netherlands' presidency, helping to amplify our No Time to Lose campaign across Europe.

"Occupational cancer is a serious issue that affects countries worldwide and strong leadership, commitment and sustained focus are needed to help tackle it."

IOSH's No Time to Lose campaign has already gained support from the European Agency for Safety and Health at Work (EU-OSHA), and other safety and health bodies in countries including Cyprus, Croatia, Ireland, Malta, Portugal and Slovenia.

For more information about IOSH's No Time to Lose campaign, and to download free resources, visit www.notimetolose.org.uk. Latest information around the campaign can also be found via @_NTTL on Twitter.