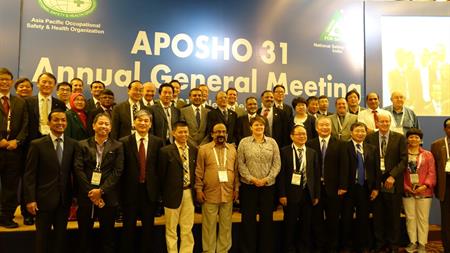 Vincent highlighted IOSH's work to raise awareness of occupational cancers through its No Time to Lose campaign, while Andy presented a paper on design for safety in construction.

John, meanwhile, discussed ISO 45001, which will be the first internationally-agreed health and safety management systems standard to apply to organisations across the world.

It is anticipated that ISO 45001 will be completed and published in October, when it will replace BS OHSAS 18001.

IOSH has played a major part in the development of the standard as it has Category A Liaison body status on the project committee (PC 283).

John said: "With the imminent introduction of ISO 45001 and our involvement within Annex SL of the Standard, we were not only requested to present a paper on its progression but also its general detail.

"IOSH via its regional involvement and long-term relationship with APOSHO has a strong and respected voice in the Asia-Pacific region."

The APOSHO committee discussions resulted in the formulation of a task group of six members to review the region's training needs for ISO 45001, with John selected to be the one to champion the section.

He was also confirmed as the chair of the OHS Management Committee for the next three years during APOSHO's AGM.

John said: "This gives IOSH a key role in shaping the way forward for the region's OHS culture.

"It proved a most positive conference with great opportunities ahead for promoting 'a safer and healthier world of work'."

Work being undertaken by IOSH Singapore Branch in regards to the development of a training programme for schools in the region was also highlighted at the APOSHO Training Committee, with John saying it was "well received".

IOSH Hong Kong is due to organise the APOSHO conference in 2018 in collaboration with the Hong Kong Occupational Safety and Health Association (HKOSHA).