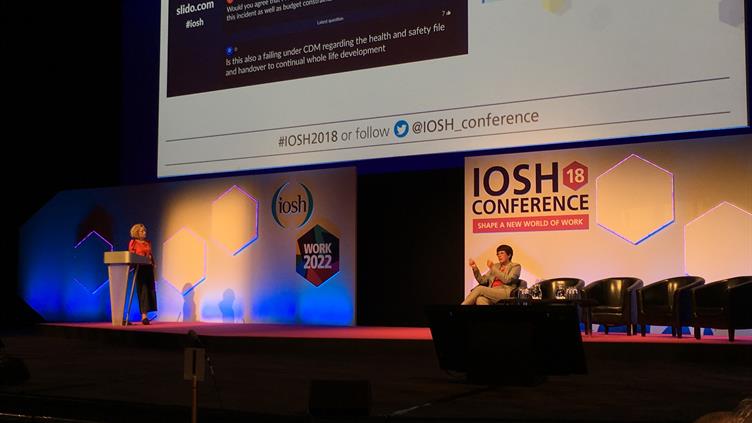 Kicking off the day at the macro level, Bernd Treichel of the International Social Security Association (ISSA) gave several hundred delegates a brief update on the Vision Zero global campaign his UN agency launched at the World Safety Congress in Singapore last year (http://visionzero.global). The initiative now has 2,000 organisations signed up, he said, and is still looking for more employers to sign up "with no strings attached" to its principles of accident prevention and enhanced training.

Still on the global stage, at a later session delegates heard about the experiences of the early adopters of the new ISO 45001 OSH management systems standard.

Kate Field of certification body BSI offered an insight into the common non-conformances that auditors are finding among those trying for accreditation. The requirement to consult all workers was one of these. "We are seeing organisations missing that," said Field. She added that consultation arrangements sometimes stretch no lower than supervisory level and even when they do, miss topics for consultation such as new policies or objectives.

The shadow of last year's Grenfell Tower fire, which killed 72 people, is still cast across the safety and health community. Dame Judith Hackitt, who conducted the government-sponsored review of the UK's fire regulatory system prompted by the Grenfell disaster, explained her recommendation to introduce a safety case regime like that used in high-hazard industries such as oil and gas to the construction and management of high-rise multi-occupancy buildings. She warned delegates that the new regime would have an impact beyond the construction sector on anyone managing and maintaining these properties.

Hackitt responded to criticisms voiced at the launch of her report that she failed to advocate a ban on combustible building cladding. "If we only fix the cladding issue, we could only guarantee there would not be another fire caused by cladding," she said. "Unless we fix the system we have no way of guaranteeing we couldn't have another catastrophic high-rise fire caused by something else."

Another salient issue for OSH practitioners aired early in the day was mental health management. "We are making progress", said IOSH's chief executive Bev Messinger, who noted that mental health in the workplace is a "top priority" for three in five chief executives and that evidence suggests that by the early 2020s "more than three-quarters will have a defined mental health strategy in place".

However, she said it was "disappointing" to see the results from the Reward and Employee Benefits Association survey, which found that boards "are not that engaged in driving change around wellbeing". Less than one respondent in ten said their board was actively driving its organisation's wellbeing agenda and one in ten said their board "had little or no interest in employee wellbeing".

From the macro to the micro scale, in another session John Richardson, operations manager at Matrix Risk Control, advised delegates on making marginal gains through small, incremental, improvements in safety.

Richardson cited Virginia Mason Medical Center in Seattle, which had reduced its insurance premiums by 74% over a six-year period by encouraging hospital staff to report small mistakes across a range of hospital services. By promising that staff would not be reprimanded for highlighting the errors, he said that management had received between 800 and 1,000 safety observations each month.

But in the question-and-answer session, Bridget Leathley, trainer and writer at the Safer Choice, warned that OSH managers could become "overwhelmed" by the sheer volume of near-miss reports and that employees needed help to distinguish between observations that are essential to safety and less important ones that could be dealt with by other departments such as facilities.

Leathley returns to lead a session on new OSH technology tomorrow, in an 18-session programme that will provide us with the material for Tuesday's blog.