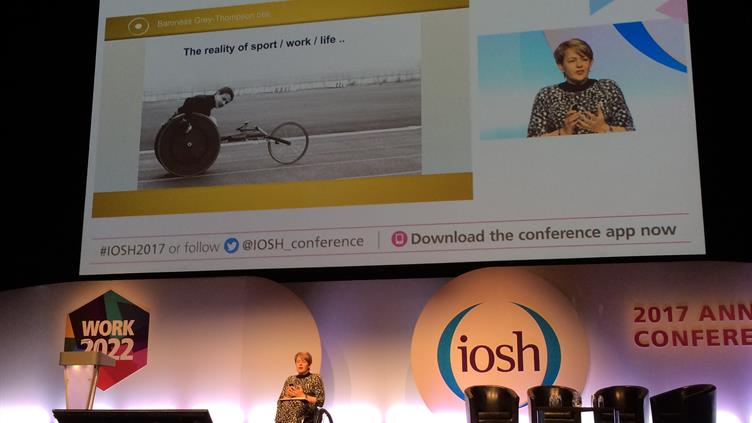 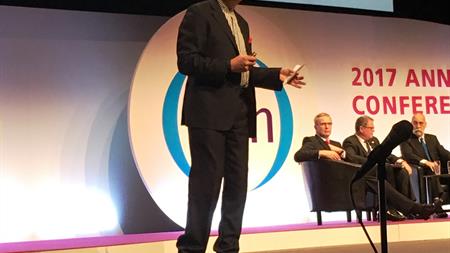 Thompson said she only missed five daily training sessions in 16 years and spent the last four years of her sporting career trying to shave 0.01 seconds off her race time. "That's about the same as the width of two sheets of paper," she said.

Asked by presenter Cathy Newman if the prejudice she had sometimes faced as a wheelchair user upset her, Thompson admitted it did, but added: "I think the resilience I learnt from competing enables me to step back from that -¦ I try to be really calm about it because it's about trying to educate people. A lot of the time it comes from a place of not understanding."

"If we let populism rule, when we have vacuums left by not being under EU law, will we make the wrong decisions because we respond to the most recent accidents and what the newspapers want us to do?" asked safety coach and writer Bridget Leathley in a debate on the rise of populism in politics and the Brexit vote.

A delegate countered that practitioners must help drive standards and shape the new laws after Brexit. Former IOSH president Lawrence Waterman, who convened the session responded: "The implication of what you've said is that we need to be more activist than we have been."
An end-of-session poll of delegates on the question, "Are populist politics a threat to our health and safety standards?" revealed 61% believed they were.

In an earlier breakfast session on the ISO 45001 management systems standard IOSH policy head Richard Jones noted some of the new challenges the standard -- due to be published early next year -- would pose to those used to certifying their organisations to BS OHSAS 18001. These included setting fixed targets for continual improvement, monitoring supply chain safety and opening up all senior staff to questioning by certification auditors. "Top management may need some coaching," Jones warned.

Jones was back discussing supply chain issues along with corporate social responsibility in a later session with a panel including Kirsten Margrethe Hovi of Norwegian aluminium producer Norsk Hydro. Asked whether managers should be targeted on safety in performance-related pay systems, Hovi said yes. "My CEO won't get his bonus if there are any fatal accidents or we don't hit our target total incident rate," she said.

IOSH president elect Craig Foyle, who stepped up to the institution's most senior elected post at the end of the conference, reported on the results of research commissioned from pollsters Opinium which found two-fifths of business leaders said that sickness absence had significantly dented their organisations' productivity in the past five years.

He was followed by Tony Bickerstaffe, chief financial officer of infrastructure contractor Costain who said that investing in a health and wellbeing programme was a straight business proposition for his company. He believed measures such as mandatory mental health awareness training for managers and extending the company's employee assistance programme to 26,000 subcontractors would pay dividends in attracting talent and making his firm an employer people actively sought. He had taken soundings at a recent gathering of graduate recruits and the most common motivation for choosing Costain was: "I heard it was a good company to work for."

At the end of the conference delegates were invited back to Birmingham's ICC for IOSH 2018 next September.