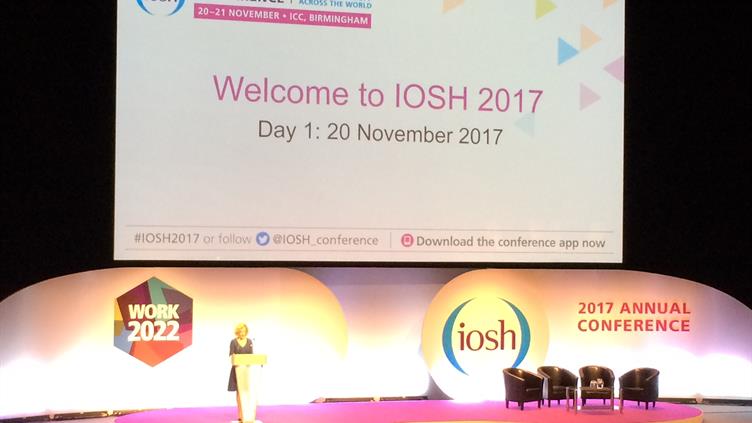 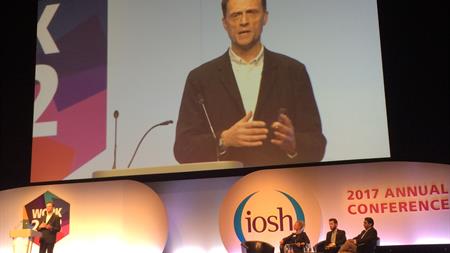 The strongest came from IOSH chief executive Bev Messinger who launched the conference with an overview of progress on the WORK 2022 strategy that aims to improve safety and health standards worldwide by collaboration and influence.

As an aside to an overview of IOSH's aims for its WORK 2022 strategy which aims to help cut the estimated work-related death toll of 2.78 million a year by collaborating with and influencing bodies worldwide, Messinger told delegates her brother-in-law had been killed in a workplace accident on 12 October.

"We buried him last Wednesday," she said. "Those 2.78 million fatalities aren't somewhere else, they are here."

Geoff McDonald, former HR in Unilever and mental health advocate, told his own story of waking up in the night in 2012, feeling his heart speeding and finding it hard to breathe. "The first thing that went through my mind was that I was about to have a heart attack," he said.

What was, in fact, the first of several panic attacks led to a diagnosis of anxiety-fuelled depression. He said he believed his decision to talk to family and friends about the problem saved his life, a view underpinned by the subsequent suicide, completely unexpected, of one of his best friends who had not felt able to tell anyone how he felt.

Stephen Martin, director general of the Institute of Directors carried on the theme of mental health, saying that many senior managers think they run businesses in an approachable, open fashion, where employees can talk about their problems. "But I think we are often fooling ourselves."

His personal illustration came from the time in 2009 when he was chief executive of Clugston Construction and he took part in the television programme Undercover Boss. Going out among his workforce, he said: "The thing that made me realise we had a problem was that nobody recognised me."

The experience pushed him to talk more to his workforce on its own terms and to make safety tours less "like a royal procession".

John Dony, research associate at the US National Safety Council's Campbell Institute, admitted to delegates that the US is "five to ten years behind the UK, Canada and Australia in terms of the maturity of the health and wellbeing conversation".

Dony and his colleague, Joy Inouye, reported on research that found wellbeing programmes are most effective in workplaces where there is already a strong foundation of safety. Such programmes were also linked to fewer workers' compensation claims and reduced hospital admissions, Inouye said.

In a lunchtime session on the challenges of managing OSH in Nigeria, Kayode Valentine Fowode of Kevron Consulting majored on the events run by his IOSH branch in Lagos, but noted that the difference in personal risk perception and acceptance was hard to imagine for those in western countries who had not grown up playing in streets where there were usually broken bottles.

"My life has mostly been a failure," Matthew Taylor confessed in a session on the "gig economy" that closed Monday's proceedings. Taylor, whose report to the government on the rights of workers in contingent employment taking their work from mobile apps, was referring to his career making public policy for almost 30 years.

IOSH policy director Shelley Frost underpinned the importance of Taylor's work highlighting unequal treatment that attaches to differences in employment status. Frost launched new research commissioned by IOSH which found only 33% of temporary workers said they had been given personal protective equipment by their employers compared with 57% of those on permanent contracts.

Single policy levers, or "big sticks" such as trying to ban a type of employment model, do not work, he said, but a mixture of levers, including driving transparency among businesses about how their business models work and a requirement to provide workers with a statement of employment terms from day one, could make a difference.

IOSH's big announcement of the day was the launch of its new business-focused qualification for health and safety practitioners, which teaches organisational and management skills alongside risk management.