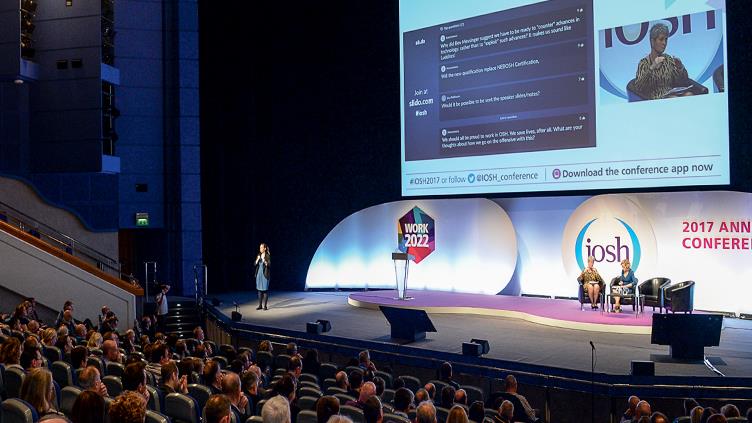 IOSH chief executive Bev Messinger set the tone for the two days of IOSH 2017 in her opening speech to several hundred delegates at Birmingham's International Conference Centre on 20 November 2017.

Messinger said safety and health practitioners were instrumental in helping employers to show a more caring attitude as the need to recruit and retain good workers was paramount and investors increasingly expected organisations to better look after their staff.

"Employees are looking for roles that give them purpose with ethical employers who look after their wellbeing at work," she said. Responsible employers, wellbeing and what makes "good work" were recurrent themes in the conference's keynote addresses.

Global workplace mental health consultant and campaigner Geoff McDonald told delegates his drive to make organisations improve their understanding and provision in this area was born of experience.

In 2008, when McDonald was a human resources executive at Unilever, he began to have panic attacks, eventually leading to a diagnosis of anxiety-fuelled depression.

"As I left the doctor's surgery I made a decision that changed my life," he said. "I decided I would not be burdened by the stigma of anxiety and depression."

He was open with his family and friends about his condition and drew on their support, along with antidepressants, cognitive behavioural therapy and frequent exercise, telling himself "be patient, you are loved, you can get better".

He said the value of openness about the problem was brought home to him four years later when one of his friends committed suicide with no warning, leaving a young family. "Stigma had killed him," McDonald argued, "because if he had had a physical illness he would have put his hand up."

He said Unilever offered a full range of psychological support but it was little used until there was a head office initiative promoted by directors, then take-up increased eightfold.

"Business leaders must do more to demonstrate that talking about mental health concerns will not harm an employee's career," said Stephen Martin, director general of the Institute of Directors (IoD), carrying on McDonald's theme.

Martin noted that 80% of IoD members believed good workplace mental health was important for business but only 14% said they had formal policies in place: "a strikingly low number".

I was going around interrupting concrete pours

Many senior managers believe they run businesses in an approachable, open fashion, where employees can talk about their problems, he said. "But I think we are often fooling ourselves." He recalled the time when, as chief executive of Clugston Construction in 2009, he took part in the television programme Undercover Boss.

Going out among his workforce unheralded, he said: "The first thing that made me realise we had a problem was that nobody recognised me. "A picture on a noticeboard or in a magazine doesn't have the same impact [as face-to-face contact]."

He had previously conducted site tours "like a royal procession", where he was surrounded by other directors, all in suits and never talking properly to individual workers. He had changed that, dressing in clothes appropriate to the work on site and scheduling conversations in breaks.

"[Before] I was going around interrupting concrete pours," he recalled. "You have to remove all the barriers until you show people you are serious about engaging with them."

The link between physical and mental health was stressed by Dr Paul Richardson, author of a report by the Society of Occupational Medicine on return to work. Richardson talked about clinical and psychological flags that have been developed to give warning signs to doctors about patients' barriers to return. The first clinical flag relates to the underlying medical condition, which is determined by the severity of the disease. There is a separate one for comorbid depression, in which the condition combines with another.

Richardson said: "I think it's important to recognise that people who have a physical health problem are two to four times more likely to suffer from depression compared with the general population and that is something that goes unrecognised even by members of the medical profession."

Matthew Taylor recently compiled a UK government-commissioned report on the rights of workers in contingent employment, many taking their work from mobile apps. In a keynote presentation on the gig economy, Taylor said his report had avoided recommending "big sticks" to force employers to give these workers more employment rights.

"Some people said I should ban zero-hours contracts or umbrella companies [which contract workers exclusively through recruitment agencies]," he said. But he argued that his recommendations -- yet to be accepted by the government -- to make employers issue new workers with immediate statements of their terms and conditions and to clarify the legal definitions of workers, employees and self-employed people, would reduce exploitation but preserve the best features of the gig economy.

IOSH strategic development director Shelley Frost underpinned the importance of Taylor's work highlighting unequal treatment that attaches to differences in employment status. Frost revealed findings of a new survey commissioned by IOSH, in which only 33% of temporary workers said their employers had given them personal protective equipment compared with 57% of those on permanent contracts.

Kris de Meester, chair of the health and safety working group at trade confederation BusinessEurope, sought to rebalance the impression held by some that the gig economy was threatening traditional employment models, noting that the gig economy represented a 1% share of EU employment "and that proportion is not expected to increase drastically". Labour force surveys across member states showed 73% of the workforce were in standard employment in 2005 and that proportion remained stable in 2010 and 2015.

De Meester said improving work and psychosocial conditions was not a matter that suited a heavy-handed "instrumental" approach. He observed that a joint agreement between unions and employers' organisations on stress risk management in Belgium had produced no observable improvement in stress levels.

The best way to reduce stress was by talking to employees about what they wanted, he said. "How many employers know what their employees' aspirations are? Not many, I'm guessing."

Paul Haxell, partner at Park Health and Safety, who featured in our December 2017 article on interim management (bit.ly/2j6aDF5), also spoke about employee engagement. He cited one organisation he had worked with whose safety and health induction made it clear that the only purpose was to comply with the Health and Safety at Work Act. "Yawn!" was Haxell's response. "This is an organisation that was trying to live a set of values, one of which was caring. Now the induction is about caring and protecting other people. But it still covers the compliance aspect."

Andy Murdy, managing director of Explorator Consulting, and Wade Pilkington, managing director of Clipper57, reported on the state of safety on north African construction sites. Language barriers and inadequate policy enforcement among an inexperienced workforce were the primary reasons for shortcomings, they said.

On a project in Morocco, Pilkington found method statements that were 14 pages long: "I've got 200 farmers that have come in off the field. Some are welders, steel fixers, riggers -- they don't read English and they don't understand English. How do you think that's going to work?" He consolidated the documents into one page "to give the interpreter [-¦] the opportunity to say, 'This is what you need to do, don't do this; job done.'"

Murdy questioned the effectiveness of a UK-based systematic approach to managing safety and health in low-income countries with an untrained casual workforce.

He said: "Are risk assessments and method statements the right way to go, or is what we're missing the basics of how to construct a scaffold, how to operate a crane, how to segregate vehicles from pedestrians? Because if you haven't got it right at that level, there's not that inherent understanding. I suspect we've got to have a rethink [-¦] because those experiences that we've had don't actually fit the cultures that we're operating in."

In a lunchtime session on the challenges of managing OSH in Nigeria, Kayode Valentine Fowode of Kevron Consulting gave examples of the work his IOSH informal network group in Lagos was doing that fulfil Murdy's prescription. The network has grown to 300 people and arranged demonstrations for groups of practitioners in safe scaffolding erection and fire control, drawing the resources of local businesses. "In the past we have left health and safety to the regulators," said Fowode, "and they don't have the capacity."

Cut of their jibs

"Take a blank sheet of paper and start again," Karen White was told by her boss in 2014 after a rise in the number of lifting incidents at Siemens subsidiary Dresser-Rand's 54 compressor and turbine repair centres worldwide. White is Siemens' EHS global director and found a significant proportion of incidents (108 out of 362) was linked to cranes.

In a plenary session on the first day White told delegates that, after a failure modes and effects analysis (FEMA) and subsequent global safety standdown revealed a 30% defect rate among Siemens' 20,000 synthetic web slings, the company replaced all faulty accessories, improved storage conditions, implemented post-use inspections and mandated the use of protective wear pads and sleeves.

White said: "We're looking at design changes so that we don't have to use slings at all. We want to use something much better than that and redesign the process, but for now this is the stage we're at."

Second, with the help of an aviation specialist, White and her team consolidated three "very lengthy" pre-lift checklists into one document that focused solely on the critical elements of a lift. These are those that exceed 75% of the total capacity of the crane, require the use of more than one crane, or where the object has an undetermined centre of gravity that could cause the plant to overturn.

The remedial measures were implemented business-wide after a successful pilot launch phase. A follow-up survey found almost 100% of all crane operators knew the definition of a "critical lift" and around 90% said they had been successful in implementing the use of the new critical lift checklist for applicable lifts.

Ellie Harvey, a researcher at Loughborough University, said the construction industry could benefit from positive thinking. She argued it lagged on innovation and her research with Maeve O'Loughlin, senior lecturer at Middlesex University, had looked at what the industry could learn from resilience in safety.

We used to think that accidents were caused by failure; now we think they are caused by normal adjustments

She said the construction companies tended to focus on the 1% of the time when things went wrong, but should concentrate on 99% of the time when they go right because there is a lot more data to look at and learn from. "The thing about having good safety performance is that there aren't many accidents to learn from, so how can you make any more progress?" she asked. "But if you look at everyday work and what goes right, then we can continue to learn."

She added: "We used to think that accidents were caused by failure; now we think they are caused by normal adjustments, people coping with situations and responding to change."

The perception was that the industry should look for treatable causes "but there aren't always obvious causes to treat. If it's just variability in everyday work, then there isn't a cause there or violation that we need to address."

Harvey said the implications for investigations used to be about accidents, failures and what went wrong but should now focus on everyday work, what normally goes right and what normally happens. "That means we can be positive and proactive rather than negative and reactive."

Practitioners will gather at the ICC again next September for IOSH 2018.