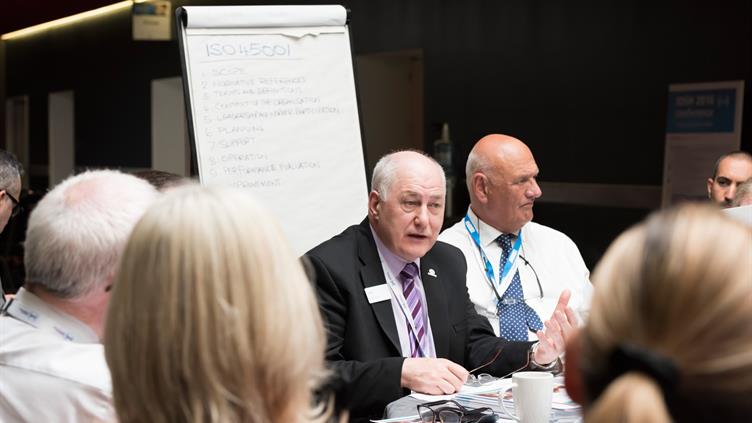 It was the first time the roundtables had been held as part of the institution's annual conference. About 100 people attended the eight concurrent sessions.

Updates on the progress of ISO 45001, the impact of the new sentencing guidelines, and crisis management were among the themes.

IOSH's head of policy and public affairs Richard Jones chaired the session on ISO 45001 along with David Smith, a consultant from iMS Risk Solutions, and Trevor Dodd, product technical manager at BSI. All three have been involved in the PC 283 committee, which is overseeing the development of the worldwide standard.

Richard told delegates about the progress, saying its expected publication date has been put back to June 2017 because of the large number of comments made about it.

Participants heard that the standard will give organisations a universally-accepted framework for improving employee health and safety, reducing workplace risks and creating healthier, safer working conditions.

David Smith said the need for leadership commitment is "much more demanding" than the current OHSAS 18001 standard, which it is set to replace.

"No longer will it be acceptable to have health and safety as an appendage," said David. "It must be integrated in the business process."

The roundtable also heard the new standard will be less prescriptive than its predecessor, allowing organisations to set up their own processes, but that this will create more challenging auditing procedures.

Participants discussed the impact of guidelines that now see courts consider the turnover of a company when calculating fines, as well as harm and culpability.

Some delegates commented on the significant increases in the number and level of fines for incidents that caused little or no harm to workers, thanks to the risk-based approach to sentencing.

With fines for larger organisations reaching into the millions, one participant spoke about the need to incorporate the potential for severe fines in an organisation's risk register.

The seven-and eight-figure penalties are making headlines, delivering a reputational hit to those businesses on the wrong end.

Companies could become more risk averse -- some could even consider locating premises overseas as a result, was one comment.

But actions can be taken in mitigation to reduce the severity of the fine, said Hilary, such as evidence of steps taken voluntarily to remedy the problem, and a high level of cooperation with the investigation.

The crisis management discussion was chaired by Mary Lawrence, from Osborne Clarke solicitors, and was attended by more than a dozen delegates.

They discussed what is meant by a 'crisis' and how businesses and organisations should have a crisis management plan that is tailored to their specific needs, along with a common language everyone in the organisation can understand. These plans, it was said, should be continuously tested.

The roundtables were held at the end of the second day of the conference. The other topics were the progress of the Health in Construction Leadership Group, an update on CDM, IOSH's No Time to Lose campaign, the IOSH Blueprint, and IOSH's research programme.