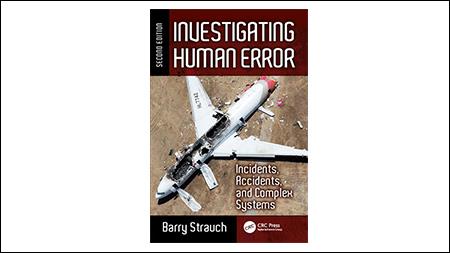 But investigations often fall short when they get to the difficult issue of human error, seeing it as a principal cause of accidents.

Psychologist Barry Strauch argues such an approach misses the point: no investigation can be considered to be complete until those leading it have understood why people acted as they did.

In the second edition of his book, Strauch explores human error from the investigator's point of view. His focus is transport accidents, including air and rail crashes, but the findings are relevant to other complex system tasks such as running a power station control room or carrying out a surgical procedure in an operating theatre.

There are four main sections: section 1 "errors and complex systems" sets the scene, then "antecedents" delves into latent factors such as the equipment, operator and corporate culture. The third section reviews the various sources of data on which investigators can draw, while the fourth ("issues") includes chapters on "maintenance and inspection", "situation awareness and decision making" (important because at one stage "loss of situational awareness" became the new catch-all accident cause"), "automation" and "final thoughts". This last section also includes an extended case study based on the crash of an Asiana Airlines Boeing 777 at San Francisco in July 2013 (the burnt-out and tail-less aircraft shown on the front cover).

The book has a strong structure that aids understanding and it gives enough detail so that the reader understands the complexity of the issues involved.

The theory is there too and helps the reader to understand the facts of what happened. If you want to delve into the sources, they are copiously referenced and indexed, and each chapter has an introduction and summary so that you can see at a glance what it covers. Almost all the chapters include a practical checklist for the investigator: a useful feature.

Like systems, no investigator is perfect. As investigators we hope to show objectivity, attention to detail and painstaking persistence, but exercising these positive attributes sometimes leads us to lose touch with the human side of what we are investigating: empathy, tact and consideration are important qualities for the effective investigator.

Strauch brings together all these qualities in this book: he is technically thorough, but never loses sight of the human cost of accidents. He rightly presents being an investigator as a great calling and gives hope that future tragedies may be prevented -- if only we avoid short cuts as we seek to learn from what's gone wrong. Highly recommended, and excellent value at the price.