Insight of the summit 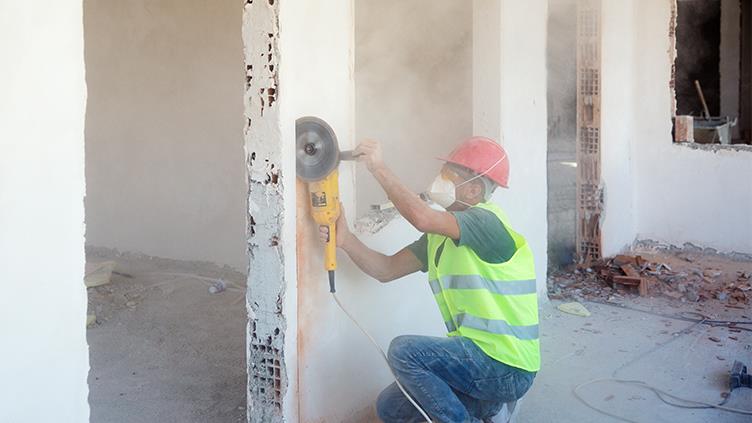 "I now walk the streets where I am on the board of one of the biggest hospital trusts in the Rotherham/Sheffield area and I see those people who were my age going to one of the hospitals that I am involved in with all the problems that unwittingly we made happen way back then," Martin Temple, Health and Safety Executive (HSE) chair, told construction leaders at London's Royal Institution on 26 January. "Those people did not enjoy a good career and they are not enjoying a good retirement, if they have one at all. We must not let that continue." 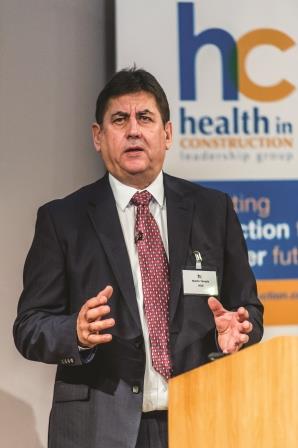 Recalling his early career at British Steel Corporation, where he was dutyholder for nine brick works, Temple urged the industry not to let 1970s' thinking slow the sector's progress on managing and controlling health risks.

Organised by the Health in Construction Leadership Group (HCLG), the second health summit brought together the UK's major construction and client safety heads, leading professional bodies, including IOSH and the British Safety Council, the British Occupational Hygiene Society (BOHS), trade unions and the HSE. The meeting's purpose was to assess progress made on the industry pledges made a year ago and make new commitments.

Temple identified three headline occupational health challenges for the industry: mental health and stress, musculoskeletal disorders and respiratory risks. In response to the first challenge, the morning session saw the official launch of the Mates in Mind programme (see p 8), an initiative which aims to raise awareness and understanding of poor mental health in the sector and training for volunteers to help support troubled colleagues.

On respiratory hazards, Temple said that it did not demand "rocket science" to reduce silica dust exposure and its related health impacts, including chronic obstructive pulmonary disease (COPD), lung cancer and silicosis. He also reminded delegates that asbestos continues to kill 2,600 construction workers a year in the UK. As industry leaders, he said it was summit delegates' duty to work with the hard-to-reach small-to-medium-sized businesses to raise standards.

Steve Hails, director of health, safety and wellbeing at London's Tideway sewer project, told the audience that, at a meeting in April last year to firm up the pledges made at the first summit, OSH heads from the signatory companies agreed to focus their efforts on dust and mental health.

Clive Johnson, group head of health, safety and security at Land Securities and one of HCLG's founders, reminded the construction heads that the group's vision was to make construction the leading industry for occupational health and disease prevention by 2025.

Dylan Roberts, director of health and safety at major contractor Skanska, listed some initiatives since the group's formation. 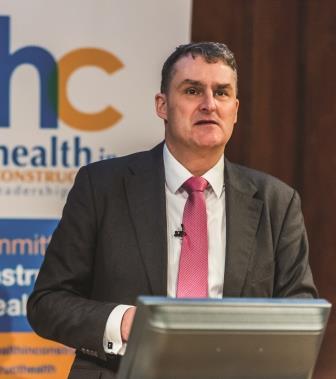 The HCLG has convened subgroups to examine prioritising health in building design, data gathering, health promotion and mental health. Afternoon workshops for safety heads after the morning summit were intended to support the corporate initiatives that flowed from the chief executives' pledges. One of the subgroups, the Design for Health Task Group, has set up five projects to support designers, one of which is the skills, knowledge, attitude, training and experience (SKATE) programme.

Kat Perry, principal engineer at consultancy Atkins, who oversees SKATE, co-presented a workshop with Balfour Beatty's health and safety projects manager Kathy Smith. They outlined the group's progress in investigating the competencies that industry believes designers need to comply with the Construction (Design and Management) Regulations 2015 and how they can best design out hazards or communicate residual challenges.

The Design for Health Task Group is coordinating a series of SKATE workshops with Loughborough University, which will undertake a research project later this year to review the outcomes. Perry said professional institutions will be able to use the findings from the SKATE programme to ensure that undergraduates through to chartered professionals have the core attributes and skills needed to help design out health hazards.

"It's really important that, as designers, we fully understand the impact of our decisions throughout the design," she told IOSH Magazine. "Often the devil is in the detail, and we don't always have the opportunity to see projects through from start to finish, and then actually see what happens on site. Safety hazards are much more widely understood -- now we need to raise awareness of health hazards and work out how to reduce them through design and better collaboration."

In the morning session, Clive Johnson also pointed up some of the company-level initiatives by last year's HCLG pledge signatories.

Skanska identified that the UK construction sector lacked hard data on the occupational or environmental monitoring of respirable crystalline silica (RCS) levels. Recognising that some of its operatives could exceed workplace exposure limits for the dust, Skanska consulted an occupational respiratory disease expert to review its health surveillance protocol. As a result, it carried out environmental and personal monitoring of the most-at-risk workers in its piling and foundation operations to fine-tune surveillance for silica dust exposure and to identify quickly employees with indicators of deteriorating respiratory health. 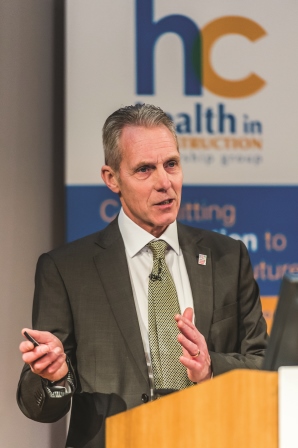 By improving referrals to GPs for workers with deteriorating lung function and more accurately determining whether the condition was work related, Skanska was able to avoid standing workers down, improving operational productivity. The project also created a data bank, which Skanska says could be used by the wider industry to inform HSE policy and guidance on RCS.

Balfour Beatty offered an example of eliminating health hazards at the design stage. As subcontractor for mechanical and electrical installation on a project, the firm convinced the principal contractor and principal designer to substitute brackets for cable trays, fixings for which holes had to be drilled into the underside of a concrete floor slab, with an alternative precast into the slab.

Precasting means workers will not be exposed to the large quantities of RCS that is created by drilling, and avoids the associated hand-arm vibration risk. The prefabrication also removes the work at height hazard of drilling into the slab from a work platform. The project's managers reported that precasting the struts reduced the work at height by 75%.

Retail and commercial fit-out specialist MACE Como highlighted its use of inflatable booths to deaden the sound around concrete cutting and drilling work on the refurbishment of finance company ICE Futures Europe's City of London headquarters. The booths cut noise by 20 decibels for nearby workers and contained dust and vapour spread.

At the other end of the construction cycle, Carillion introduced a package of measures during the demolition phase of enabling works for a major regeneration scheme in Birmingham's city centre.

A joint initiative with the company's demolition contractor led to a trial to monitor and measure operatives' personal exposure to dust levels, using a lightweight sampling pump device that used Bluetooth communications technology. Managers could track the operatives remotely and collect real-time data to measure whether dust exposure was above set action levels. A background monitoring station was installed at sensitive areas on site to alert site management when trigger levels had been exceeded. The case study says that at no point were action levels triggered.

Extra face-fit testing and a health surveillance programme to monitor key indicators such as lung function were introduced to raise awareness of airborne dust risks. The project also sought to dampen dust at the source by using high-reach water cannon suppression systems. 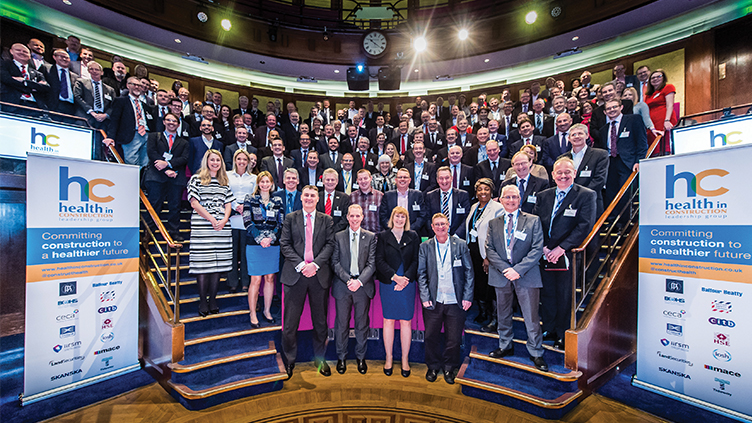 IOSH's contribution to the group's work involves a project to transfer health lessons from big-build developments to small businesses. The project was launched with a roundtable meeting in Bristol, which brought together representatives of IOSH's Construction Group, the HSE and industry bodies, including the National Federation of Builders, Hire Association Europe and the Federation of Master Builders. The partners will work with major contractors to distil OH good practice into "bite-size steps" that can be disseminated to smaller firms.

The initiatives are detailed in a library of case studies on the HCLG's website (bit.ly/2hgGWiu) where HCLG pledge signatories share successful health improvement projects they have undertaken over the past 12 months.

Meanwhile, at the leaders' summit Temple concluded his address by urging the assembled chief executives and OSH heads to step-up their efforts to combat ill-health.

"Managing and controlling health risk requires some different thinking compared with safety," he said. "Effective management of work-related health needs to be an integral part of our business."

On this note, he ended with a quotation from the playwright Tom Stoppard: "A healthy attitude is contagious but don't wait to catch it from others, be a carrier."