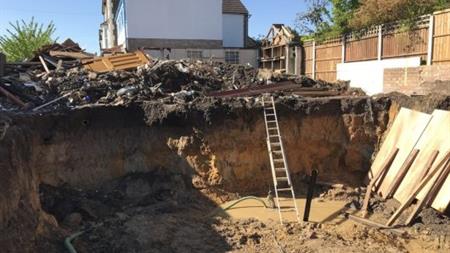 Between May 2018 and February 2019, the Health and Safety Executive (HSE) carried out a series of inspections at a construction site in South Woodford in London, after safety concerns were raised. During the inspections, the site manager and company director Tahir Ahmed was served with two prohibition notices and his company, All Type Electrical and Building, was served with two prohibition notices and two improvement notices.

One of the improvement notices, the HSE told IOSH Magazine, was served on 24 September 2018 with a compliance date of 30 November 2018 to ascertain competent advice. No request was made to extend the notice, and no evidence of an attempt to comply with the notice was ever received.

Ahmed, the director of All Type Electrical and Building who was running the site, had not received site manager training, the HSE confirmed. "We believe he had never received such training as he did not produce any training certification and he pleaded guilty to the breach," the regulator told us.

At Westminster Magistrates' Court, All Type Electrical and Building pleaded guilty to breaching reg 15(2) of the Construction (Design and Management) Regulations, which states: "You have not employed or appointed a person to supervise or manage construction work who has the necessary training to carry out the tasks allocated to that person in a manner that secures the health and safety of any person working on the construction site".

The firm also pleaded guilty to contravening s 21 of the Health and Safety at Work Act for failing to comply with an enforcement notice. The company was ordered to pay a £60,000 fine plus full costs of £5,216.

Ahmed also admitted breaching s 21 of the Health and Safety at Work Act and was sentenced to 18 weeks' imprisonment suspended for 12 months, 180 hours of unpaid work, plus full costs of £5,060.

Speaking after the hearing, HSE inspector David King said: "This case highlights the need for suitable and sufficient planning, managing and monitoring, using the appropriate work at height equipment and having a competent site manager.