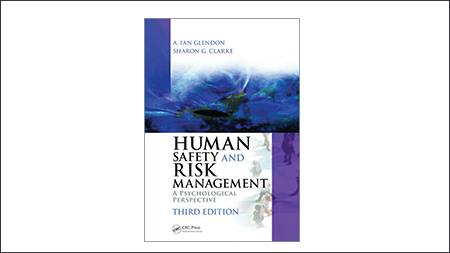 Subtitled "a psychological perspective", this is the third edition of a book first published in 1995. But so great have been the changes in this field that little of the original content remains. Key areas include a fresh understanding of the importance of emotion in risk decisions and advances in cognitive neuroscience -- made possible by imaging techniques that allow scientists to see the workings of the nervous system. It also sets out new approaches that question models such as Heinrich's accident ratio triangle.

There is a new chapter on sensor technology as well as enhanced chapters on issues such as sensing danger, error detection and stress management. I particularly enjoyed chapter 4 on risk perception. One interesting finding is that, after 9/11, the switch from air travel to car caused more people to die in road accidents, but fewer of flu the next winter. There's also lots of research on risky driving, especially by young men. I also enjoyed chapter 5 on reframing error. This tells us human error was first seen as a problem to be solved but it's now seen as an innate attribute, essential to learning and development.

But it is the remaining chapters that will probably be of most interest to safety practitioners. Chapter 7 delves into the sensitive topic of accident proneness and sets out the latest findings that link safety and danger perception to personality traits such as extroversion, agreeableness and conscientiousness. Chapter 8 looks at team dynamics with special reference to surgery and aircraft operation. Teams are often less risk-averse than their members (group think or "risky shift"). But respect for the "captain" or "consultant" may deter team members from speaking up when something is clearly wrong. The remaining chapters cover leadership, culture and managing risk. There's plenty on management models (for example, transactional versus transformational leadership -- see Lexicon (L is for leadership) as well as what it means to be an "authentic" leader.

For the non-psychologist, it is heavy going. Acronyms abound (on one page chosen at random I counted no fewer than 20) but there is an eight-page glossary at the back. And readability is helped by the fact that there are only two authors: this isn't a collection of papers from a huge team of contributors as is common in academic books. And it's not without humour, as in chapter 5's discussion of what you see when you look in the mirror on the way to the bathroom in the night. This is a recommended guide to the state of the art in human factors research.