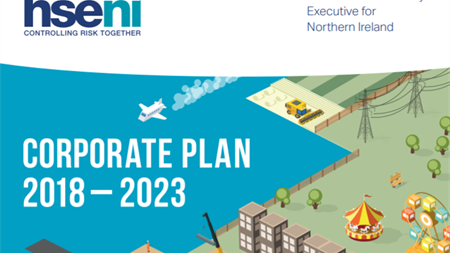 The target is part of the HSENI's new draft corporate plan for 2018-2023, a consultation for which was launched last week.

Workplace fatalities in sectors regulated by the HSENI have fluctuated over the last ten years, between six in 2009/10 and 23 in 2014/15. Sixteen people were killed at work during the 12 months to the end of March 2017.

Meanwhile, the figures indicate that the downward trend in serious injuries is levelling off and has remained flat since 2014-15 when 36 workers were badly hurt.

The Corporate Plan 2018-2023 says: "Since 2006 approximately 9% of major accidents result in serious injuries and 3% result in fatalities. On average we see 54 serious and fatal accidents per year. We aim to reduce this total by 10% to no more than 50 per annum on average."

It said that in the term of its previous corporate plan the major workplace accident annual average was 393 and the yearly average number of cases of employees unable to perform their normal work duties for more than three consecutive days as the result of an injury was 1,791.

"These three outcomes are challenging targets and are in large part dependent on the health and safety performance of other parties, such as the 124,000 businesses in [Northern Ireland] and the public sector," says the draft plan.

Occupational lung disease and occupational cancer, mental health at work and musculoskeletal disorders will be a strategic focus in the new plan. Workplace ill-health costs Northern Ireland's economy an estimated £238m a year.

The document focuses on a sector-based approach and specifies the challenges and priorities in key industry sectors.

In agriculture, which is thought to employ around 47,800 people, the HSENI says it will prioritise guarding dangerous moving parts of machinery, safe animal handling, slurry safety and work at height.

According to its statistics on RIDDOR (the Reporting of Injuries, Diseases and Dangerous Occurrences Regulations) incidents from 2011 to 2017, 42 of the 49 fatalities (89%) and 44 of the 79 major injuries (64%) in the sector resulted from animals, falls, equipment and slurry.

Mixing slurry can be hazardous as the gases, the most dangerous of which is hydrogen sulphide (H2S), are released very quickly, and in large quantities, as soon as the mixing starts. H2S is poisonous and high concentrations can affect sense of smell and cause difficulty breathing and disorientation.

In the construction sector, the HSENI plans to educate the 54,000-strong workforce on working at height, the Construction (Design and Management) Regulations, demolition, asbestos removal and occupational lung disease and cancer.

Since 2009, 63 people a year on average have died from either mesothelioma or asbestosis in Northern Ireland, according to the HSENI.

It says the non-identification of asbestos-containing materials prior to work commencing and insufficient awareness and training of workers about the dangers of asbestos are the main challenges, which it aims to tackle by fully implementing the asbestos licensing regime and carrying out inspections of licensed asbestos removal to ensure safe standards are followed. It also aims to educate workers on the need for appropriate asbestos surveys and to raise awareness of the dangers of working with asbestos.

The latest strand of IOSH's No Time to Lose campaign, launched on 9 April, aims to raise awareness of and prevent asbestos-related cancer.

Launching the 12 week consultation, HSENI's chief executive Keith Morrison said: "Improving health and safety standards is about all of us working together -- HSENI, employers, employees and other partners -- to reduce work-related serious injury and ill health. We very much see this document as a shared corporate plan and shared targets for industry and HSENI to aspire to. The underpinning approach to our strategy is collaboration and partnership."

Derek Martin, thee HSENI's chairman, added: "The outcomes we are seeking can only be achieved by working with our industry partners. This draft plan sets out what HSENI sees as safety and health priorities in each of the sectors and we are asking industry representatives and professionals to engage with us so that, together, we can agree a shared list of priorities for each sector for the next five years."