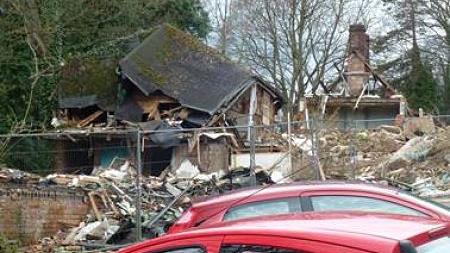 A member of the public initially contacted HSE in March 2014 about work taking place on the former site of the Chesham Community Hospital in Buckinghamshire.

The inspection also discovered demolition arrangements that had not been recorded in writing and heard witness accounts of unsafe work at height and unsafe use of construction machinery.

There was also a serious risk of injury from collapse of partially demolished buildings, in the opinion of HSE.

Both the client (Chesham Care) and the contractor were immediately served prohibition and improvement notices in October 2015 the client was fined a total amount of £30,000 for failings under the Construction (Design & Management) Regulations 2007 (CDM). Inspectors tried to contact Scot Ian Richardson but to no avail.

Then in June 2015, HSE were alerted to a site in Stevenage, Hertfordshire, where Aztec was undertaking demolition work. No risk assessments had been carried out for respiratory exposure to asbestos.

The client informed HSE that it was unaware work had taken place and had alerted the police.

HSE were again unable to contact Richardson, and a private investigator was subsequently used to locate his whereabouts.

Richardson was found guilty of two breaches of the CDM 2007, one breach of the Control of Asbestos Regulations 2012, and one breach of The Health and Safety at Work Act. He was also ordered to complete 200 hours of community service and pay costs of £1,200.

Ahmed added: "Clients have a key role in safely directing construction projects. Effective arrangements at the start can have an amplified positive impact down the various stages to completion, including making informed and competent appointments."