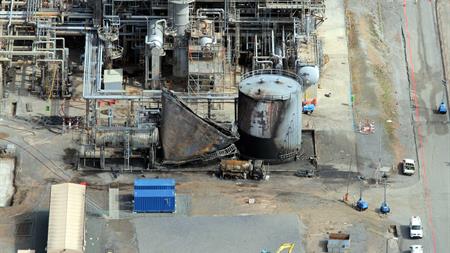 Chevron operated the refinery at the time of the incident.

The Crown Prosecution Service said previously there was insufficient evidence to proceed against any of the companies involved for offences of corporate manslaughter.

A tank cleaning operation was underway in the amine recovery unit when a 730m3 storage tank exploded, resulting in a subsequent fire.

The companies will appear at Haverfordwest Magistrates' Court on 24 September.

Jane Lassey, deputy director of field operations at the HSE, said: "Following a painstaking and extremely thorough investigation, much of which was conducted jointly with Dyfed Powys Police, we have concluded that there is sufficient evidence to bring criminal charges."

The Pembroke Refinery today is operated by Valero Energy, "which is a different legal entity", the HSE said.