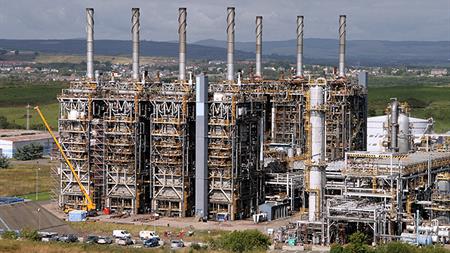 According to the 17 files obtained in response to a Freedom of Information (FOI) Act request, 23 "issues" were found at Shell UK's plants, one of which the documents noted had not been resolved, and 10 issues at ExxonMobil Chemical's facilities, four of which were described as "ongoing".

The documents which cover the HSE's inspections at the two companies' adjacent Mossmorran plants and Braefoot Bay marine terminal in 2015, 2016 and 2017, do not provide any further detail on the unresolved issues but do on some of those that have been closed out.

The files show that during a human factors inspection at Shell UK's Fife Natural Gas Liquids Mossmorran Fractionation Plant near Cowdenbeath on 2-3-February 2016, the HSE was concerned about the number of standing "critical" alarms in the distributed control system and the frequency of alarm activation.

The HSE inspection noted that this "raised concerns about the possibility of an operator missing a critical alarm, failing to respond in sufficient time, or being unable to prioritise response in a situation where a large number of critical alarms are received".

It was unclear whether these alarms linked to major accident hazards. "Some 2,000 alarms had been identified as critical, but the number of 'embedded' alarms within this total with major accident potential was not clear," the inspection noted.

Two reports mention an investigation into a "loss of containment incident" at Shell UK's Braefoot Bay loading terminal on the Firth of Forth near Aberdour in Fife, but no further details are given.

The oil giant extracts natural gasoline, ethane, propane and butane from natural gas liquids pumped from the St Fergus gas plant near Peterhead north of Aberdeen to the plant and transports some of the product by pipeline or road tanker to Braefoot Bay.

In July 2016, the regulator highlighted Shell UK's failure over "a number of years" to repair flawed seals on a gas compressor that could have resulted in leaks.

The Herald report also revealed that Shell UK was cautioned in August 2016. The HSE said its reliance on operator responses to alarms to prevent a major accident hazard was unlikely to meet the need for risks to be "as low as reasonably practicable". The regulator urged the company to resolve this issue "as a matter of urgency".

The multinational was also criticised for delaying the replacement of secondary seals on the rims of two gasoline tanks from 2013 to 2015 and then again to 2017.

In addition to the failings in Fife, the HSE also served an improvement notice on Shell UK on 23 November 2017 after it failed to maintain emergency shutdown valves at its St Fergus plant. The energy giant initially had until 21 December to comply with the notice but this was extended to 28 February. The HSE told IOSH Magazine that the notice was extended a second time to 30 June and fully complied with two days before the deadline.

The FOI reveals that ExxonMobil identified 38 major accident hazards at its Fife Ethylene Plant (FEP), which takes ethane produced at Shell UK's adjacent facility at Mossmorran and converts it into ethylene by a process of steam cracking. The oil giant also identified 14 major hazards at Braefoot Bay.

In March 2017, HSE inspectors found two leaks in the pipework that supplied saltwater to douse fires at the marine terminal site.

ExxonMobil also came under fire for failing to renew fire protection measures in 2015 at the ethylene plant and was criticised for failing to comply with 11 out of 12 safety recommendations the regulator made in October 2017.

Both multinationals are being investigated by the HSE and the Scottish Environment Protection Agency (Sepa) after four unplanned flaring incidents that took place over 25 days in June and October 2017 and March and May 2018.

The joint investigation was announced on 8 June after Sepa served final warning letters on both companies in April this year, which were related to "preventable and unacceptable" unplanned flaring during June 2017.

A spokesperson from ExxonMobil Chemical told IOSH Magazine: "Like all industrial sites, the FEP is regulated closely by the HSE to ensure the safe working of the plant. The HSE also visits and completes regular inspections of FEP to assess all safety measures and identify any areas for improvement. As recently as February this year, the HSE confirmed that there are no serious deficiencies in the necessary preventative measures at FEP under the Control of Major Accident Hazards (COMAH) Regulations, and there are currently no actions overdue.

"In order for a plant like FEP to work by the stringent COMAH precautionary standards, it is vital to assess where the highest potential hazards are on site to mitigate against major risks.

"FEP is committed to the highest standards of health and safety and our operations include regular internal inspections to ensure we maintain our excellent record -- this is reflected in the fact that in the past 22 years there have been no serious injuries at all on site."

A spokesperson for Shell UK told IOSH Magazine: "Shell prioritises the safety of our staff, assets and care for the environment. We take all HSE findings very seriously and we maintain a regular dialogue with the regulator on the safe operation of our sites.

"We have addressed the concerns raised in the inspection reports and we continually focus on, and improve, the integrity and reliability of our assets through the effort of our employees and significant investment. We have invested hundreds of millions of pounds in our facilities over the last few years, upgrading, replacing and maintaining the crucial North Sea energy supply infrastructure that we operate, including a recent project to renew all four ship loading arms at Braefoot Bay marine terminal."