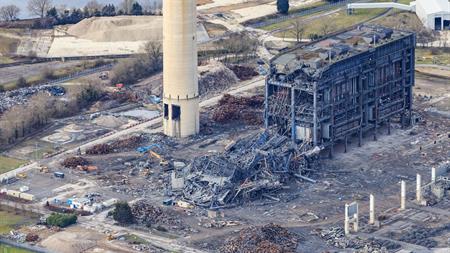 Four men died on 23 February 2016 when part of the boiler house at the disused power station in Oxfordshire gave way during demolition work.
In a statement on the third anniversary of the disaster, Thames Valley Police (TVP) and the HSE said they were forensically analysing 870 tonnes of evidence and still investigating manslaughter charges and safety and health offences.
TVP assistant chief constable Jason Hogg said: "A team of experts from HSE and Thames Valley Police, supported by independent scientific experts, continue to analyse thousands of exhibits and work through complex technical data which takes significant time to analyse and interpret.
"Further detailed interviews of both witnesses and potential suspects are also planned to further progress the investigation.
"Due to the complexity of the investigation we are working closely with the Crown Prosecution Service to make sure that all appropriate lines of enquiry are fully explored."
Construction Manager Magazine reported that the HSE has now contracted Steve Foster Cranes to remove and transfer evidence materials.
In a transparency notice detailing the contract award, which has been lodged on the Official Journal of the European Union, the HSE said it believed Steve Foster Cranes was the "only economic operator in the EU that is capable of supporting HSE in respect of transporting the materials in accordance with the requirement to maintain their evidential integrity".
The company was awarded a similar contract in February 2017.
The HSE said in the contract notice: "Steve Foster Cranes was the only economic operator to submit a technically compliant bid. HSE has no knowledge of any new entrants to the market, nor does it consider that there are any economic operators who did not bid last time that would be capable of meeting its requirements at present and consequently asserts general grounds are satisfied."
The four victims -- Michael Collings, Ken Cresswell, Christopher Huxtable and John Shaw -- were employed by Coleman and Company, the demolition contractor responsible for decommissioning the site when the structure came down.
IOSH Magazine reported last year that Coleman and Company said its own investigations "clearly show" how the accident happened.
After a pre-inquest hearing at Oxford Coroner's Court in January 2018 the firm's director James Howard said: "We commissioned our own investigations which, in our view, clearly show why and how units one and two of the boiler house collapsed. We believe the findings highlight industry-wide practices that need to be challenged and reviewed.
"We now consider it essential to share this learning as a matter of urgency, so that immediate steps can be taken within the industry to prevent future loss of life and so that the families can begin to understand what caused this dreadful accident."
Topics
Regulation/enforcement
Reporting
Safe systems of work
Construction
Manufacturing and engineering
News