How Safe is Safe Enough? 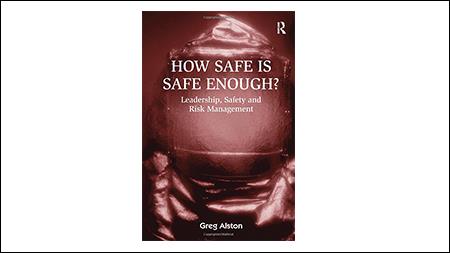 As a writer on risk, fighter pilot and US Air Force safety expert Greg Alston is uniquely qualified. Anyone with a lifetime's experience of operating high-value assets in this high-risk environment is going to have something interesting to say. In Alston's case, he was personally affected by the 9/11 World Trade Center attack; the writer was watching the "twin towers" attack live on TV when his Pentagon office was itself attacked, forcing him to evacuate.

He offers a guide to risk management, specifically aimed at leaders and senior managers. It is all extremely competent, well-written and meticulously researched, but for me it never really delivers against the high hopes I had when I opened the book.

Alston sets out the foundations of a safety management system. His starting point is to recognise the rationale for the effective management of risk, and then to apply an assessment-based approach to its minimisation. He calls on leaders to "win in the risk game" and constantly brings the discussion back to, "how safe is safe enough?"

But what Alston describes as best practice in the US Air Force (USAF) is already legally required in the UK; I doubt therefore that many IOSH Magazine readers will find much that is new. Also, in taking his USAF experience and trying to make it relevant to a wide range of readers, Alston ends up weakening his case. He avoids being specific about military flying: that would limit his audience. However, when stepping into the commercial world, he appears to lack confidence, recognising his core experience is elsewhere. Also, some of the content seems a little dated, perhaps reflecting the fact that this soft cover edition is a reissue of a hardback originally published in 2003.

Even so, there is some great material here. For senior managers, there are some handy reminders about leading by example, facing up to problems (instead of walking past them) and implementing organisation-wide programmes and procedures. The point that you're a leader whether you are the CEO or the team supervisor is well made. There are excellent aide memoires -- for instance, the "morning personal risk assessment" checklist on p 38 and the nine-point "winning the risk game" guide on p 106. There are also good summaries of the risk management programmes of major players such as Lockheed Martin, Schlumberger Technology and General Electric. I just hoped it might have been a bit more personal, novel and exciting.