Housing trust hand mangling was down to lack of RAMS 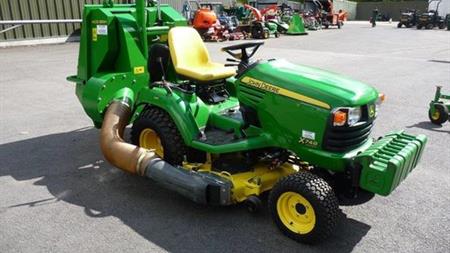 As we reported last week, on 28 March 2014 the 24-year-old gardener was using a ride-on mower to maintain the green spaces around the housing association's estates in Hitchen Drive, Dukinfield. The chute to the grass box, which is located behind the driver's seat on the mower, kept blocking up (as often as once every few minutes).

The worker lifted the grass box, which opens like a clam shell, turned off the machine and walked round to the rear of the mower. He reached into the box to unblock the chute and his hand was struck by the mower's fan blade. The fan, which runs off the power off-take shaft from the tractor unit, provides suction to draw the grass cuttings from the cutting deck into the box.

There was a hinged guard protecting the fan, which takes around 30 seconds to stop turning after the engine is switched off. But if the chute was not kept clean the guard could jam open, exposing the fan.

The employee's thumb and forefinger were so badly damaged they had to be amputated. Both bones in his forearm were broken and he also sustained a broken wrist. Health and Safety Executive (HSE) inspector Sarah Taylor said he needed skin, vein and nerve grafts, and sections of his stomach were taken to build a new palm. The treatment is still ongoing.

New Charter Housing Trust was aware of the risk from the fan, Taylor said, but the grass box's cleanliness was not part of the daily checks.

"The failings started with the risk assessment, which didn't include anything to do with the grass box or blockages," Taylor said. "Following on from that, there was no method statement, no safe system of work and the standards of training were poor."

Taylor told IOSH Magazine that the worker had never used a ride-on mower in his previous employment and had no formal training. He was therefore unaware that he needed to wait for the fan to stop turning.

New Charter Housing Trust was fined £140,000 at Manchester Crown Court on 7 January and ordered to pay £70,000 in costs after being found guilty of breaching Section 2(1) of the Health and Safety at Work Act.

The HSE served the company an improvement notice and a notification of contravention early on in its investigation. A new risk assessment and method statement system of work was drawn up and all grounds maintenance operatives were sent on a three-day ride-on mower training course following the incident.